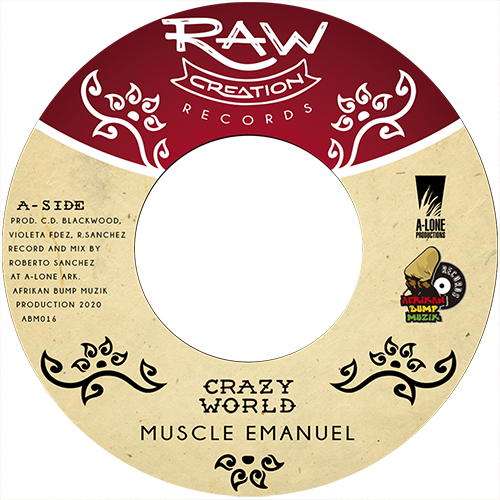 Muscle Emanuel spent his early years on Orange Street in Downtown Kingston. His childhood teemed with numerous record stores and reggae icons like Leroy Smart, Ken Boothe, Gregory Isaacs, and Dennis Brown who would serve as the main influences for his eventual career choices. Yet despite his early exposure to the music, he would not come to public attention until his family moved to Spanish Town where he would attach himself to some of the popular sound systems providing entertainment in the old Jamaican capital. It was on the popular Stereo One that he was encouraged by Ricky Stereo to take the music business seriously. It resulted in the recording of his debut single Mi Inna Di Bizniz, a musical proclamation that he was ready to take his place in the reggae arena. More singles followed including Grandma Say, It’s D’Love, Nagging, and Inna Dem Time Yah. Besides that, he also founded his own record label Afrikan Bump Muzik which in collaboration with A-Lone Ark Productions released Purple D’Lyte’s 2019 debut LP Nature’s Love on Raw Creation Records.

That album features a track called Rebel Up across a riddim that was produced by Muscle Emanuel, Violeta Fernández aka Purple D’Lyte, and Roberto Sánchez. The same riddim has been utilized for Muscle Emanuel’s solid message song Crazy World, which will also be featured on the singer’s forthcoming album in Showcase format (vocals followed by dubs). The vocal side of this platter is definitely worth hearing, but it’s Rebel Riddim Dub, the dub version on the flip side, that turns out to be a real killer!