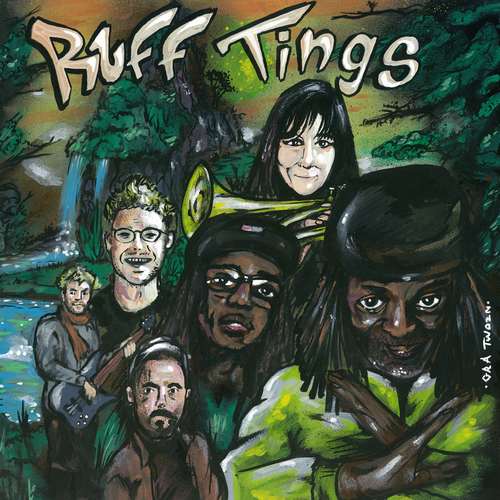 Out of the deep south of France, the beautiful city of Montpellier, we recently received a 4 track 12″ platter from Jah Works Promotion. The one riddim EP Ruff Tings is packed in a beautifully styled sleeve with the portraits of the musicians.
Jah Works Promotion sound system has been active since the mid-1990s. Rootsy created the sound and is its manager. The musician who created the Ruff Tings riddim, the multi-talented Leodica, specializes in roots music, while colleague Iwake focuses on making stepper/digital tunes. The Ruff Tings riddim evokes the glory days of reggae from the 1970s, aided by Roberto Sanchez’s golden touch mix. Good job!

King Stanley is a singer, songwriter, and producer from Birmingham. He works on various projects and is busy with his second album. With his seasoned vocals, he takes care of the title track, a massive roots reggae piece that pulls out all the stops. You’ll find yourself playing this one over and over, fi sure!
The instrumental track –Trumpet Tings– by Youthie aka Juliette Bourdeix showcases her true talents. Since she started making music in her youth, she has been constantly engaged, both as a teacher and a musician. She knows how to create a compelling interaction between the riddim and her trumpet playing, the beautiful organ playing also worth mentioning.

The flipside opens with JohnnyGo Figure from New York. He grew up in a mix of reggae, soca, pop, funk, and calypso. Active as a singer, MC, producer, and DJ, he is a respected figure in the NY reggae scene. With the song Let Jah Be Praised he gives meaning in his own way to his love for and belief in the power of Jah. The harmony between his vocals and the riddim is 100%. In the last track we can enjoy Leodica’s instrumental version of the riddim. Pure ites!

Get this platter, you won’t be disappointed at all.