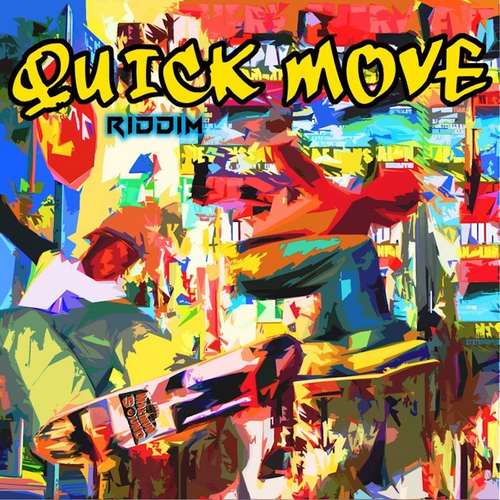 After the summer 2020 released Brik Move comes the Quick Move, both dancehall riddims produced by Frenchie for his Maximum Sound label, a mainstay of the reggae and dancehall scene for quite some time. Just like the Brik Move, this fresh dancehall riddim is a catchy and very danceable offering. Unlike most current so-called dancehall riddims that are created for the new Jamaican ‘stars’ which often stand out in causing instant boredom, esteemed producer Frenchie always manages to produce and arrange an irresistible dancehall riddim full of vibes.

The juggling gets started with three big names in the current reggae & dancehall arena. In recent times they more or less have become the usual suspects on the Maximum Sound label. Busy Signal displays his immense level of skill on the intoxicating title track which sees him reign supreme from beginning to end. Also fine singer Christopher Martin turns in a stellar effort with his take on the riddim entitled Large, while Mr. Vegas also makes you feel good when comes in with another winner called Bun It Down. In the past, these three artists have always delivered worthwhile cuts on Frenchie-produced riddims, so it isn’t a real surprise that they also excel on the Quick Move Riddim.

Other worthy takes on the riddim come from Pressure Busspipe and The Kemist whose vocal style on Self Defence more or less reminds of Sean Paul. For dancehall fans who prefer to listen to explicit lyrical content, there are also raw versions of Lisa Mercedes’ Paranoid, Lia Caribe’s Dm, Renee 6:30’s Bruk Life, and The Kemist’s Self Defence available.

Quick Move is another quality riddim from Maximum Sound that safely can be added to digital dancehall shelves.