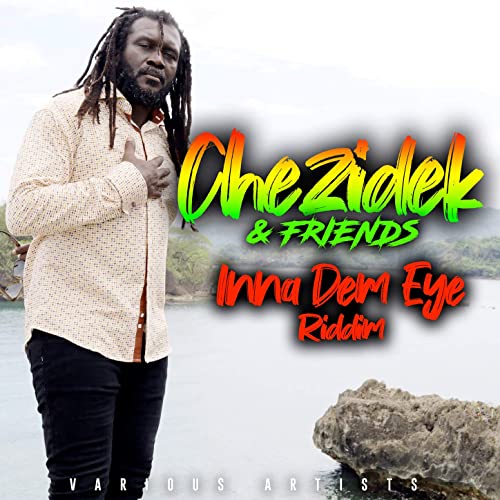 When this one riddim set surfaced at the beginning of 2021 we kinda overlooked it due to the bulk of digital releases we had to listen to. When we finally, after a few weeks, carefully listened to this set, we decided to make a review of the album. Of course, because there are a number of strong songs on it, but also because we were happy to listen to a good old reggae riddim again. We haven’t got a lot of information about this album, but probably it bears the seal of Chezidek’s Chezi Berry Records and is distributed by Tad’s International Records. Tad’s recently made the album officially available on various digital platforms.

The song –Inna Dem Eye– that gives name to the riddim was featured on Chezidek’s successful 2020 album Hello Africa. This hard-hitting protest song is of rare quality in terms of lyrics and delivery. Not strange for a pur sang rootsman like Chezidek. Since starting a successful career for Fatis more than 20 years ago, he has continued to sing conscious lyrics with abandon. As mentioned, the backdrop is a captivating up-tempo reggae riddim, graced by a cutting guitar lick and useful synth riffs.

The line-up as presented here leaves nothing to be desired. All well-known and experienced artists, except Peas Head, who is a great unknown to us. And yes, it is a mission impossible to pinpoint mediocre songs. Duane Stephenson’s subdued Hail Rastafarian can easily compete with the powerful vocal delivery of the likes of Perfect Giddimani, Turbulence, and Lutan Fyah. Norris Man delivers with true emotion that will bring the listener to full attention.

The aforementioned unknown Peas Head surprises us with a passionate tune as he sings words of wisdom with heart and soul. Natty King – it’s a shame we don’t hear much from him – shows with Leave Dem To Time that his roots vibe is still alive and kicking. Mikey General, blessed with his recognizable high tenor voice, knows how to sing a good roots song like no other. Combined with the strong riddim, his song Martial Law becomes a roots special. To complete the album, the instrumental version of the riddim has been added.