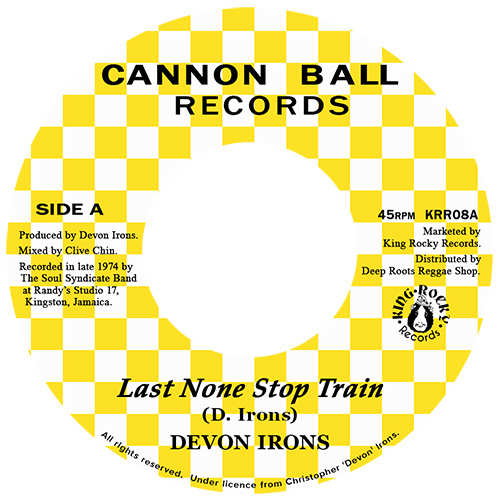 France-based King Rocky Records continues to reissue rare 7″ singles. Now they come up with a limited run of 300 copies of Devon Irons’ first solo single which has been licensed directly from Devon Irons.

Born Christopher Irons in Morant Bay in the parish of St. Thomas, Devon Irons together with his friend Errol Berwise started a duo called The Now Now Healers after he and his family had relocated to Santa Cruz in the parish of St Elizabeth. The duo split up after Devon Irons moved to Kingston, where he made friends with Earl Zero. It was Devon and Earl Zero who voiced None Shall Escape The Judgement at Duke Reid’s Treasure Isle studio for producer Bunny Lee. However, the latter took both voices off the tape and made Johnny Clarke voice it over completely.

After that first experience in the studio, Devon Ïrons went to Randy’s Studio 17 where he recorded his self-produced debut solo single, Last None Stop Train, backed by the Soul Syndicate band, in 1974. It was released on his own Cannon Ball imprint with Soul Syndicate Band’s Train Version on the flip side. At the time, the real nice sounding Last None Stop Train which can be best described as a rural style of reggae music, didn’t do much for Devon Irons who then linked with Lee ‘Scratch’ Perry in Washington Gardens for whom he recorded the roots anthem Ketch Vampire.

Another good-to-have single if you’re a fan of classic roots reggae!