Mighty Massa – Music Is My Desire

Mighty Massa – Music Is My Desire 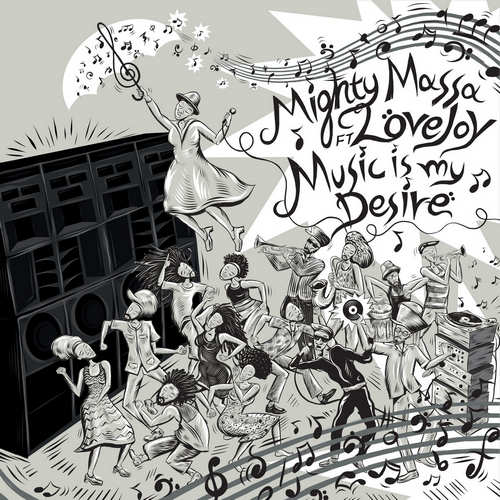 If you have it in your collection, pull out the 1982 Island Records released 10″ vinyl single, put the needle on the flip side, and listen to the Geoffrey Chung-produced discomix of Music Is My Desire by Pablo Moses. Pretty sure you’ll understand why this killer roots vocal cut resonated deeply with musical activist Ras Lion of Berlin-based Lion’s Den and inspired him to do a project around this tune. Being a fan of the Love Joys and their works for Wackies, he thought it would be great to do a reinterpretation with the Love Joys as well as going for a new approach on the riddim to give it a fresh twist. The regular collaboration with Ras Kush and his Black Redemption label then was the key to make things happen.

Mighty Massa from Japan recut a wicked version of the riddim in his studio in the far east, featuring Shaggy Tojo on the Kete, and afterwards Claudette Brown from the Love Joys recorded her take of Music Is My Desire on it in the US. Together with a truly awesome reworking by RDH Hi-Fi from France and special artwork by Costantinos Pissourios, the dreamed project became reality with the release of a vinyl release in 12″ format.

On the A-side one can fulljoy the works of Mighty Massa, who not only has managed to capture the essence of the original piece but also turned it into a modern sonic experience that will surely please anyone who hears it leaping off the speakers of custom made sound systems. The second track, Desired Dub, is a worthwhile hearing dubbed up version of the riddim track. And then there’s the ‘remix’ of RDH Hi-Fi on the flip side, which has a rougher approach than the works of Mighty Massa and thus in the end causes more excitement.