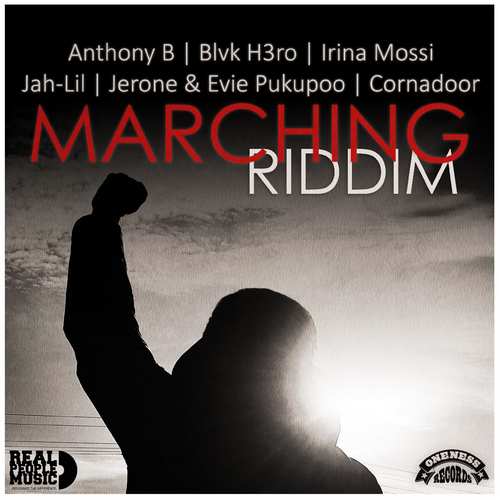 The instrumental, composed by Alex ‘Drummie’ Domhoever for Real People Music, was recorded and produced both in Jamaica and Germany in recording studios such as the renowned Tuff Gong and Alborosie’s Shengen Studio. The Marching Riddim is driven by a heavy bassline played by the veteran musician Errol ‘Flabba’ Holt of Roots Radics fame, and the powerful staccato of the three-piece horn section of the Magic Touch band.

The 7-track set gets started with Anthony B’s solid My Day Will Come in which the Original Fireman stresses the importance of self-confidence. Next comes Jamaican rising star Blvk H3ro whose Reggae Music lyrically is an obligatory tune that doesn’t leave a good impression. And although Cornadoor from Germany touches the same theme, his cut is a far better effort. Sweet-voiced Swiss-Congolese vocalist Irina Mossi dedicates her song Doing What Please Me to pursuing what pleases her and standing up for her rights. Upcoming young talent Jah-Lil from Jamaica spreads his message of unity, peace, and equality on a global scale with the poignant Human Race before young Kingston-based singer Jerone (Riley) and Everaldo ‘Evie Pukupoo’ Creary of the No-Maddz deliver The Search Is Over, an outstanding powerful tune about self-awareness and self-confidence. The selection is rounded off by the straight instrumental, which is well worth hearing.