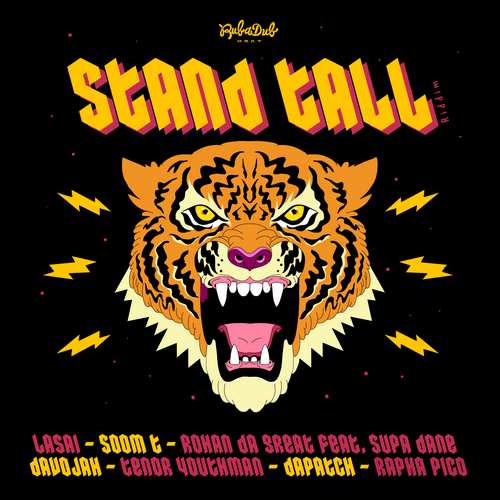 Since he started his reggae label Rub A Dub Mrkt in 2017, producer Kiko (a former member of the France-based No More Babylon band) has released several musical projects including a noteworthy full-length album from the Jamaican singer Carl Meeks. His latest project is a strong and powerful ‘one riddim’ set titled Stand Tall Riddim. The fresh original riddim – composed, arranged, recorded & mixed at Rub A Dub Mrkt Studio by Kiko – harks back to sounds of the second half of the 1980s when riddims were almost entirely created by using digital instrumentation.

Involved in this juggling project are international upcoming artists from Spain, Scotland, the US, Russia, France, and the Netherlands, who all ride the riddim effortless and deliver cuts that display their own style. Spanish singjay Lasai comes up with the appealing Talk About Love, which reminds the listener that love is precious. The riddim perfectly fits the vocal style of ‘Raggamuffin princess’ Soom T, who talks about how sometimes life can be hard in her solid song Struggle. Rohan Da Great alongside Supa Dane, known from the collaboration with Carl Meeks on a track featured on the latter’s Rub A Dub Mrkt produced album) deliver the riddim’s uplifting lead track Stand Tall. Tenor Youthman is a Russian singer in the vein of Tenor Saw, who has already attracted attention with a few of his releases. Here he presents Big City Life, in which he talks about nowadays topics. Talented French artist Dapatch talks about how sometimes calling oneself a deejay or singer is just a fashion. Roots reggae singer Rapha Pico makes a good impression with his conscious piece Progress, while Davojah’s Flora and Fauna is a message tune about the emergency of dealing with the situation of planet Earth. Kiko rounds off with the straight instrumental version of the Stand Tall Riddim.

In all, an entertaining release from the Rub A Dub Mrkt label.

Listen to all Tracks