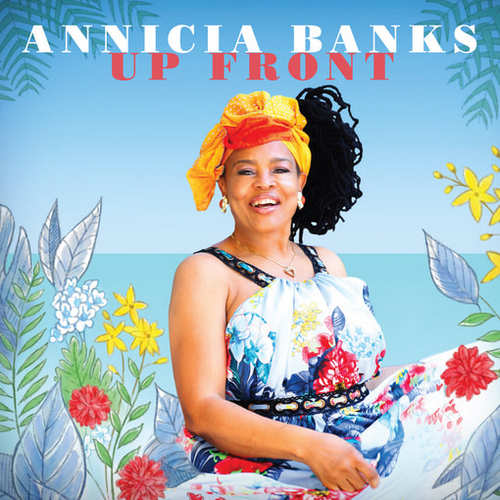 New York-based record label RawVuemusic has released Annicia Banks’ debut EP, both on CD and as digital download. Annicia Banks is a reggae singer/songwriter from Kingston, Jamaica, who has toured the Caribbean, the US, Asia, Africa, and Europe, providing background vocals for internationally acclaimed reggae artists like Judy Mowatt (of I-Threes fame), Sister Carol, and the late great reggae icons Bunny Wailer and the ‘Crown Prince of Reggae’ Dennis Brown. Besides that, she has provided background harmonies at countless recording sessions and can be heard supporting many reggae greats on a variety of classic tracks. The all-female Light Of Love trio she formed with Sharon Tucker and Joy Tiulloch has performed all across Jamaica. Furthermore, she was also one of the lead singers for the 12 Tribes of Israel band.

With the release of the Richard Rowe and Sidney Mills produced Up Front EP, Annicia Banks, who currently resides in Massachusetts, is finally able to showcase her skills and talent as a solo singer and songwriter. On each track, she fully impresses as a vocalist, while self-written songs such as It’s You, Hush, and the spiritual closer Restore My Soul, see her shine as a songwriter. The EP takes off with Jamaica Forever, a powerful collaboration with deejay King Kohai. It’s such a big tune that it immediately goes on repeat. The rootsy Hush fires on all cylinders and is another highlight here. The worth hearing lover’s pieces It’s You, It’s Too Late, the latter across a relick of the Shank I Sheck riddim, and the Bob Andy penned song Free Free Free, show that she’s equally at home with songs that deal with romance. And then there’s also the previously released single, a soulful interpretation of the Dennis Brown hit Love Has Found Its Way, with Dean Fraser’s sax play being a nice addition.

After having listened to this EP, one truly wonders why it had to take so long before someone gave Annicia Banks the chance to come up with a collection of solo tunes.