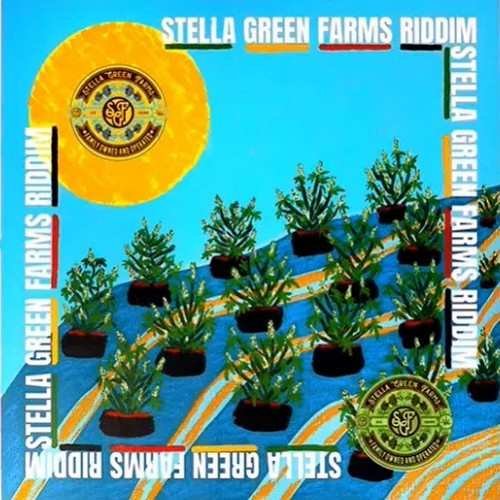 DJ Oddio, the producer and creator of riddims from Applegate OR, built the riddim with Shield and Buckler Music adding some really nice flavour to it. And as Stella Green Farms, the family-owned and operated Organic Sun Grown Cannabis Farms in Mendocino and Lake County CA, was looking for a creative way to promote their farm and the 2021 growing season, the idea of bringing in big names in reggae to record original songs over the riddim was suggested to them and they decided to go for it.

A project like this can’t do without Perfect Giddimani as he’s an artist who has a huge number of cannabis songs under his belt. The Jamaican artist, known for his fiery and capricious style, voiced a great song for the company giving the Stella Green Farms plants their very own reggae theme song. This thoroughly entertaining opener is followed by Royal Blu’s matching No Joke, a song that maintains the insane level of vibes from the preceding track. Weed Ooh finds Lutan Fyah in a prime form with especially the meshing of vocals and riddim making a serious impression. Pressure Busspipe gets to the point with the title of his tune on the riddim, Good Herbs, and does so in mighty fine style. Singer/deejay Runkus, one of Jamaica’s most sought-after young talents, rides the riddim in a slightly different way. Just give General some time to grow on you and you’ll find out that this is a very enjoyable song to listen to. Lyrically the solid Buckler And Shield by D’Original Reverence, probably internationally the least known name, goes into a totally different direction as he praises Jah Almighty. The EP is rounded off by DJ Oddio’s thunderous dub version, which is the icing on the cake.