Various – Too Much Pollution Riddim

Various – Too Much Pollution Riddim 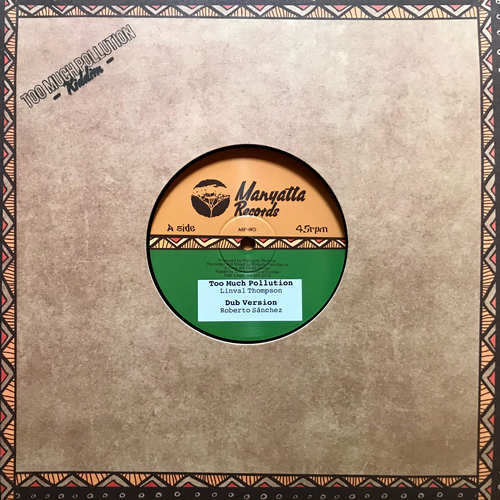 Manyatta Records from Spain is a non-profit record label that releases music on vinyl with the sole purpose of promoting culture and human values by supporting artists and their message, allocating all the proceeds to continue releasing works. The label’s first release was the 2019 issued 8-track Showcase Live album by roots rock reggae band Rackers from Santander, Spain. It was followed by the 7″ single Laredo Reggae Dubplates and the next album by Rackers called Natural Acoustic.

The label’s latest release is the Too Much Pollution Riddim on a 10″ vinyl platter. The latter brings together the talents of well-known veteran Jamaican singer/producer Linval Thompson, esteemed musician/engineer/producer Roberto Sánchez, and rather unknown vocalists Kamia and David ‘Dawitt’ Tarrio from Spain. Linval Thompson’s gorgeous Too Much Pollution virtually transports the listener back to the 1970s not least due to the vintage style backing track laid by Roberto Sánchez (drums, bass, guitar), Rueben Telford (keyboard), Max Morgan (percussion), and Gorka Fernández (trumpet, trombone). Then Roberto Sánchez expertly dubs out the riddim and calls it Nature Dub. This dub version will surely be appreciated by older fans, but also by the younger ones. On the flip side female reggae singer Kamia leaves a good impression with her cut Nature, while also Pollution Crimes by David ‘Dawitt’ Tarrio is worth hearing more than once.

This is a truly worthwhile 10″ single with four tracks that seriously hit the listener and on which the vibes remain high throughout.​