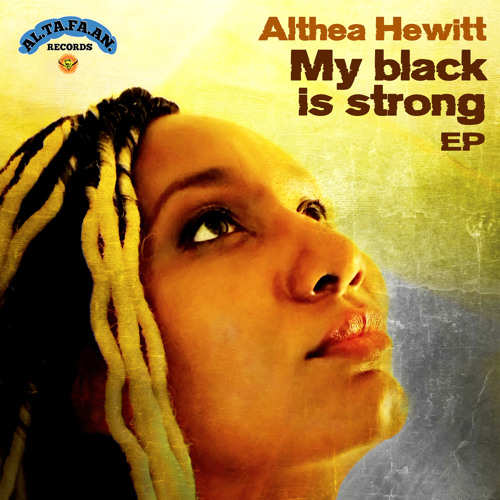 Althea Hewitt, daughter of Stephen Hewitt who’s a highly regarded guitarist and founder of the Mighty Cloud Band, is a woman who is competent in various fields as she’s a singer, songwriter, background vocalist, producer, model, and actress. Like so many other women in reggae such as Pam Hall, Fiona, Ce’Cile, and Etana, Althea has served a role as a backup singer before she took the step from the background to the foreground with her aptly titled 2008 debut album Introducing… Althea Hewitt, which yielded tracks like Boom Boom Boom, Unconditional Love, and Save Me, among others. Probably one of her best-known hits is the 2008 released reggae version of Beyoncé’s  If I Were A Boy. It then lasted about ten years before Introducing… Althea Hewitt was followed by a next full-length album.

That 11-track collection called Stronger featured three tracks that reappear on this EP, which is produced and released by Jamaica-based Al.Ta.Fa.An Records. The first one is the opener My Joy, an absolutely gorgeous lover’s rock piece which intends to say thank you to those who have walked alongside you on your path and of which you appreciate the blessed time shared. The second track is the amazing Freedom (I Cry), which shows that Althea is equally at home with romantic tunes and songs that carry more socially serious vibes. Freedom (I Cry), and also the third track is known from the Stronger album, the very impressive My Black Is Strong, are the undisputed highlights of this EP. These two go on repeat and so does the collaboration with Luciano, the powerful message tune Love Heals. This track shows that the voices of Luciano and Althea Hewitt perfectly fit together. The beautiful Friend is not only really lovely to listen to, but it’s also a song that listeners can relate to. Pure lover’s style of vibes is brought in by I Feel Good, a tune that is done in a very fine way.

Althea Hewitt excels at her absolute best on this EP, making one longing for a brand new album.