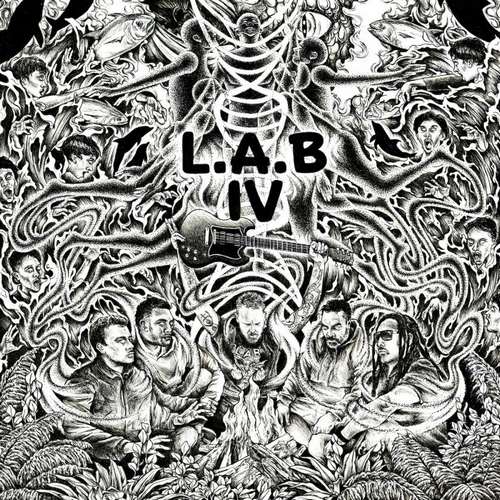 L.A.B is a band from New Zealand, with four quality albums under their belt. Initially, the band was founded by Brad Kora and Stuart Kora, but soon Joel Shadbolt and Ara Adams-Tamatea were brought in. At this moment the band consists of the four mentioned musicians and Miharo Gregory. Their current album, L.A.B IV, was released at the end of 2020 and received critical acclaim. When we received the album we put it aside after a few spins, because … not enough reggae. We decided to review it because this band knows how to bring a polished sound, a very attractive fusion of reggae, funk, blues, and soul with a big nod to the soul/funk/dance music from the eighties of the last century.

The 12 track album contains three clear reggae songs. Why Oh Why is a swinging lovers tune with a steady rolling infectious reggae beat laced with mild sound fx. A tune that will keep happy a whole summer! Then follows Boy King. Due to an almost identical intro, I linked it with that great tune from UB40, Tyler, which is certainly not undeserved. Outstanding song! Fast forward to No Roots with its realistic lyrics across a languid one drop beat that lets you dream away to a marvelous place somewhere in the Caribbean.

There is no doubt whatsoever as to the band’s musical qualities. While listening, tasteful memories emerge from top artists such as Steely Dan, Al Green, Hall & Oates, and Stevie Wonder. The use of strings in combination with the fat bass and horns in Yes I Do creates a soothing mid-1970s Al Green-esque sound. For reference, check Al’s tune L.O.V.E.! Never Give Up is a synth-driven jaunty soul tune. Although the arrangement gives enough space to the voices, the keys are somewhat dominant at times. The atmosphere of a brooding evening in an exclusive club is perfectly evoked with this song. For positive, feel good and danceable vibes, listen to songs like Operator, IJDK or My Baby. The sensitive love song Natural can be enjoyed in two flavors, acoustic and as the full, jazzy flavored, studio version.