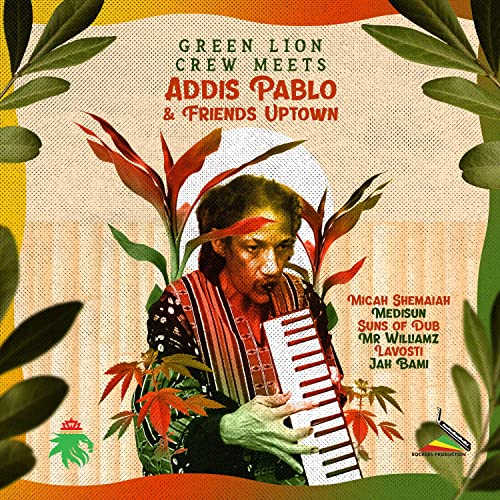 US-based Green Lion Crew, made up of the two DJs, producers musicians Zeke Stern and Dana Knowles, strikes again with their latest project for which they teamed up with Addis Pablo, the son of the late great musician & producer Horace Swaby aka Augustus Pablo. By choosing the melodica as his instrument of choice, he follows in the footsteps of his legendary father who popularised the use of the melodica in reggae music. It was in 1972 that Augustus Pablo scored a massive hit with an instrumental entitled Java. It was the start of a steady stream of well-received instrumentals including one of his masterpieces Cassava Piece. The latter came out on a Hot Stuff 45 in 1973 after which a different version appeared on the 1979 album Original Rockers.

Almost fifty years after the initial release of Cassava Piece, Addis Pablo, together with the Green Lion Crew, comes up with a new version for a 9-track riddim project. And, of course, this set includes the straight version of Addis Pablo’s blistering remake of Cassava Piece as well as its vibrant dubbed-out version mixed by the Green Lion Crew. Absolutely brilliant tracks that form the backbone of this downright intoxicating deep roots riddim selection. Micah Shemaiah’s opener Oneness is a roots scorcher that rules this set supreme. Both, the vocal cut and its dub companion mixed by Suns Of Dub, fire on all cylinders and are really impressive offerings. Another effort worth hearing comes from Grammy-winning reggae artist MediSun, formerly known as King Mas. With Mau Mau Warrior he delivers a solid cut, which is followed by the somewhat disappointing Lockdown Cottage by Mr. Williamz. Far better contributions come from Lavosti, a Kenyan reggae artist with a captivating voice, and Trinidadian singer Jah Bami.

It is the deep solid bassline, springy reverb keyboard chops, a heavy fat one drop drum pattern, and the mystical melodies of Addis Pablo’s melodica that make this modern version of the mystic Cassava Piece a winner. In all, this selection is a must-have for any reggae aficionado.