Desmond Dekker – The King of Ska Live at Dingwalls

Desmond Dekker – The King of Ska Live at Dingwalls 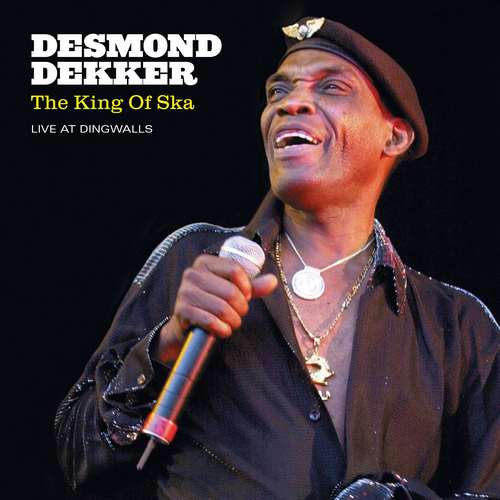 Born Desmond Dacres, Kingston Jamaica, Desmond Dekker started his career in 1962 with cuts for Leslie Kong. He teamed up with The Aces, with whom he won the prestigious Jamaican Song Festival in 1968. Dekker’s association with the Aces proved very successful as they kept on scoring a string of number 1 hits. As ska and bluebeat gave way to the less frenetic rocksteady sound, Dekker scored his first international smash hit in 1967 with the rude boy song 007 (Shanty Town). Further international hit status came with the 1969 released scorcher Israelites. That year he relocated to the UK. In the second half of the seventies, his career declined, but he re-emerged during the UK ska revival in the eighties. In the nineties, he released some albums, including the album King Of Kings. Read the review here. He died of a heart attack in 2006, aged 64.

The album Desmond Dekker – The King of Ska Live at Dingwalls is never released on vinyl before and commemorates 15 years since Desmond’s passing. It’s an exclusive release for Record Store Day 2021 – Drop 1. Available at record stores from Saturday 12th June, limited to one per person. An interesting sleeve notes sheet is included. The gig at Dingwalls was filmed and can be witnessed on a CD/DVD Double Pack, released some years back. Anyway, the man who introduced me to reggae in 1969 really had a party that night in February 2002! Desmond is assisted by four seasoned musicians and Desmond’s long-time friend and manager Delroy Williams, who provides backing vocals.

Desmond takes you on an exciting journey, revisiting some of his greatest hits and celebrating some of Jamaica’s classic tunes, such as the album opener Cherry Oh Baby, originally by Eric Donaldson. Btw, when you Google this title, the first result is: A Song by UB40…shame on Google! Even Mr. Harry Belafonte is honored, with Desmond’s version of his 1956 hit Day-O (Banana Boat Song), nice job! In the long medley on side 3, he alternates pop covers (Sugar, Sugar / All I Have To Do Is Dream) with his own songs, such as the enduring 007 Shanty Town. His very first single Honor Your Mother & Father is performed with great verve, followed by the floor filler Get Up Edina. It goes without saying that at the end, Desmond gives the audience a great ending with two of his most famous tunes. After Israelites, which is eagerly sung along, the album closes with You Can Get It If You Really Want.