Junior Byles – Press Along / Thanks And Praise

Junior Byles – Press Along / Thanks And Praise 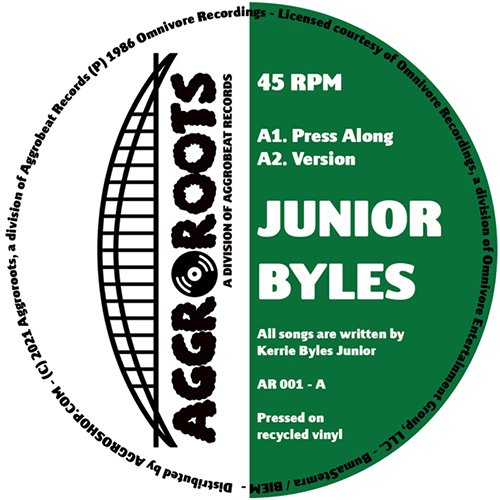 Kerrie ‘Junior’ Byles was born in 1948 and grew up in the Jones Town area. Sometime around the mid-’60s, he made his first record titled Emergency Ward under the name of Chubby and The Honeysuckers. By 1967 he had formed the vocal group The Versatiles. It was around ’70/’71, when Junior Byles left The Versatiles and joined up with Lee Perry to begin a solo career. It was Beat Down Babylon with its militant lyrics over an angry scrubbing riddim that gave Byles and Perry a massive hit in 1972. Junior Byles’ first studio album, Beat Down Babylon, came in 1973.

Fast forward to 1986, the year US reggae and blues label Nighthawk Records released the Winston ‘Niney’ Holness produced LP Rasta No Pickpocket. Recorded at Harry J’s in 1984 with the Roots Radics band the album contained three recuts of old songs and three new ones. Two of these new songs plus their Versions, which appeared for the first time on Omnivore Records’ 2018 reissue of Rasta No Pickpocket on CD, are featured on this 12″ vinyl release from Aggrobeat Records.

On Press Along, Junior Byles is joined by Larry Marshall and Niney for a chant that includes all the much loved and familiar lines – “The Hotter The Battle, The Sweeter Jah Victory” being one of them. The song is essentially about persecution, but they would have a hard job to downpress Junior Byles in a mood like this. As the title Thanks And Praise (aka Jah Will Be Mine) suggests. it’s Junior Byles paying tribute to H.I.M. without apologies. Except with Junior he always manages to get over something a little more personalised, and yet still is totally respectful. With this tune, Junior Byles shows that he has learnt a long time ago that in order to get a message to someone, you first have to get them to listen. To have the vocal cuts accompanied by its Versions is a very welcome addition.

Another worthwhile release from Aggrobeat Records.

(With thanks to Ray Hurford)