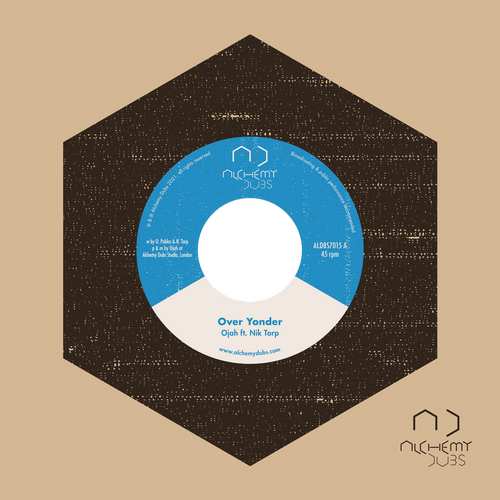 After the previously released two 12″ vinyl platters Reminiscence and Wisdom, and four 7″ vinyl singles What Goes Around Comes Around, Notting Hill, Mindset, and Light & Power, all of them featuring collaborations with Nik Torp there’s now a brand new 7″ single out on the streets which sees Ojah teaming up again with The Specials’ keyboard player. This is already Alchemy Dubs’ 20th vinyl release, and 15th 7″ single.

The A-side contains Over Yonder, an instrumental track featuring Nik Torp on melodica duties. Nik Torp not only is a masterful keyboard player, but on previous singles he has also proven that he’s capable of providing wonderful melodica melodies. Here he excels on an introspective and meditative track with a positive twist that was written during the first UK lockdown. The mesmerizing Over Yonder is a great instrumental piece with a thumping bass sound that – as its title clearly indicates – invites the listener to look to the future, to the other side, to look over yonder. On the flipside the listener is treated to Over Yonder Dub, a minimalist dub version mixed live by Ojah with analog effects that takes you on a trip deep down the echo chamber.

Another 7″ single from Alchemy Dubs that is well worth hearing.