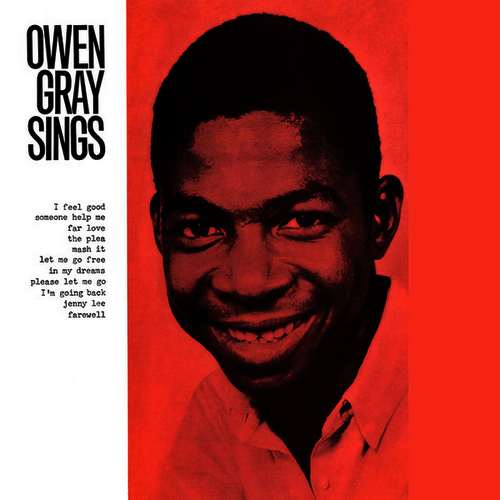 Foundation singer Owen Gray, also known as Owen Grey, is credited as Jamaica’s first home-grown singing star as he was the first singer on the island to sing in a style that wasn’t mento, calypso, or jazz. His work spans the R&B, ska, rocksteady, and reggae eras of Jamaican music. Despite having a notable amount of hits under his belt as well as a lot of top-notch releases he was not fully appreciated by the ‘serious’ reggae aficionado, most likely because he often used covers and ballads.

Born in Jamaica on July 5th, 1939, Owen Gray grew up in Trench Town, Kingston JA. He won his first talent contest at the age of nine. In 1957 he cut his first single, and two years later he was the first singer to praise a sound system on record with the tune On the Beach, celebrating the Sir Coxsone Downbeat system. More tunes for Coxsone Dodd followed before he recorded his first single for Chris Blackwell in 1960, Please Let Me Go which became a number one hit in Jamaica. Soon an album followed, Owen Gray Sings. He emigrated to the UK in 1962, where he became a popular performer. In 2019, at the age of 80, he recorded a new album under the guidance of producer Delroy Williams, read the review here.

This current reissue of the 1960 album Owen Gray Sings was an exclusive release for Record Store Day 2021 – Drop 1. Available at record stores from Saturday 12th June, limited to one per person. This very limited 180-gram vinyl re-issue (with sleeve notes sheet) of the 1961 album, commemorates the 60th anniversary of its release. It was the first Jamaican album to be manufactured and released in the UK. Issued in 1960 it was produced by Chris Blackwell who released it on Island in Jamaica and Starlite in the UK.

The music on this album is the forerunner of ska, which in turn was the foundation for the development of reggae. In Jamaica, it was called ‘shuffle & boogie’. This Jamaican variant of American rhythm & blues was initially intended for sound systems, but quickly became popular with the public. Owen Gray and long-time friend Jackie Edwards were the first Jamaican artists to hit the charts.
In addition to a number of swinging shuffle & boogie tunes, based on the New Orleans boogie woogie style, this album also contains three ballads, which are performed in a smooth doo-wop style. Chris Blackwell is known to have used The Caribs, an Australian band, as a backing band. In addition, there were Jamaican guest players such as Ernest Ranglin and Roland Alphonso.

Looking back on this album, we can conclude that we are witnessing the birth of Jamaica’s popular music that would later develop into a music genre that touched the hearts of many and influenced various styles of music outside of Jamaica.