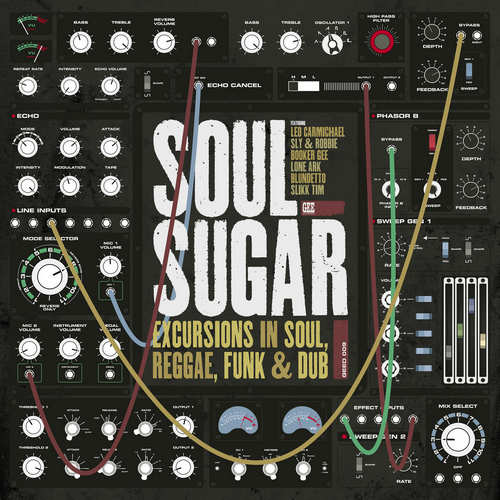 About four years after the release of their remarkable Chase The Light album, Guillaume Metenier’s Soul Sugar project is back with a brand new 8-track collection aptly titled Excursions in Soul, Reggae, Funk & Dub. Initially a classic soul-jazz trio, Soul Sugar evolved into a collaborative collective that draws just as much musical influence from Jamaican dub and reggae as from the works of people like jazz keyboardist Jimmy Smith and hard bop & soul-jazz organist and organ trio bandleader Jimmy McGriff.

This brand new album is a collection of hard-to-find tracks that have been released at different points, and on different vinyl formats, over the last three years. Of course, Guillaume Metenier aka Booker Gee is once again at the controls but this time Soul Sugar’s list of contributing musicians includes renowned riddim twins Sly & Robbie, Max Guiget aka Blundetto, Roberto Sánchez aka Lone Ark, Slikk Tim, Thomas Naim, and Jamaican singer Leo Carmichael.

Leo Carmichael is the featured vocalist on two tracks. With his inspiring and comforting voice he impresses greatly with his effortless interpretations of Luther Vandross’ 1981 hit song Never Too Much and Marvin Gaye’s 1976 sensual love song I Want You. The remaining tracks are instrumentals with lively and ear-catching organ solos from Booker Gee. It starts with one of the album’s highlights, the great album opener Aximites, which is expertly done in collaboration with Spanish multi-instrumentalist and producer Roberto Sánchez aka Lone Ark. It’s followed by the matching Out In The Rain, a sparse, spaced-out dub piece laden with fluid instrument solos and devilishly heavy riddim. Truly two superb instrumentals to get things started. The moody Matumbee is another worthwhile instrumental piece that showcases Soul Sugar’s authentic bass-heavy and seeped in analogue effects approach. With its Jackie Mittoo-esque Hammond B3 solos over a luscious riddim, Faith sounds like it could have been released by Studio One in the mid-’70s, while Cool Down is a digi-dub influenced instrumental with colourful synths sounds, echoing delay trails and sub-bass. The last track, Greedy G, can be seen as a tribute to Studio One. It’s a well-done cover of the Brentford All Stars’ tough reggae-funk instrumental from 1974, which actually is a version of James Brown’s Get On The Good Foot.

Excursions in Soul, Reggae, Funk & Dub with its impeccable sound quality is ear-candy for Jackie Mittoo fans and for those who just love to listen to really good music.

Listen to all tracks of the Album