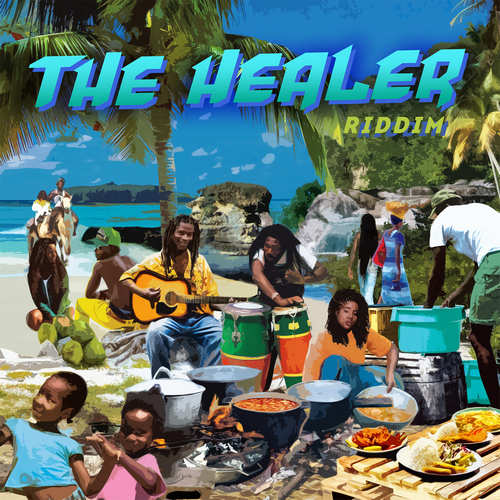 Since 1993, the year in which Frenchie launched his mighty Maximum Sound label, the Paris-born producer has produced a good few riddims that featured the biggest names and most interesting up-and-comers in reggae and dancehall from Jamaica, the UK, and Europe. At the dawn of a second summer marred by the global pandemic, the highly esteemed producer adds another quality riddim to the Maximum Sound catalogue entitled The Healer Riddim.

The Healer Riddim is a gentle skanking one drop riddim that comes with eight vocal cuts and a dubbed out version. The Healer Riddim is a fresh original backdrop voiced by some of the biggest and best artists in the genre like Busy Signal, Romain Virgo, and Pressure Busspipe, all three having quite a number of hits under their belt. Besides these reputable artists, vocal duties have been done by artists who, although having been less successful, still have established their name in the reggae arena.

The Healer Riddim, being an infectious, lighthearted sounding riddim that urges you to move your dancing feet, seemingly doesn’t need thought-provoking lyrical content. However, that doesn’t imply that all artists involved indeed have come up with more or less meaningless lyrics. In particular Busy Signal’s Burden Heavy, Till We Meet Again by Stevie Face, and Pressure Busspipe’s Everything I Need are poignant tunes that are worth keen listening. Lyrically these two tracks contrast clearly with tracks such as Romain Virgo’s Can’t Stop The Reggae and Playlist by Christopher Ellis. but that ain’t a big deal when taking in mind the nature of the riddim. Before Gregory Morris’ nicely done Healer Dub rounds off this juggling project, two lesser-known artists deliver their vocal cut. First, there’s up-and-coming Dahlia Thames aka Lia Caribe from Mandeville, Jamaica, who recently had a #1 hit with the remix of If The World Was Ending, a tune done in collaboration with Christopher Martin. Here the sweet-voiced vocalist leaves a good impression with the love song True Love. And then there’s also gifted singer/songwriter Marvin Priest, the Australia-based son of UK reggae singer Maxi Priest, whose I Swear is worthwhile listening to.

This is a juggling project we all needed while waiting for better days.