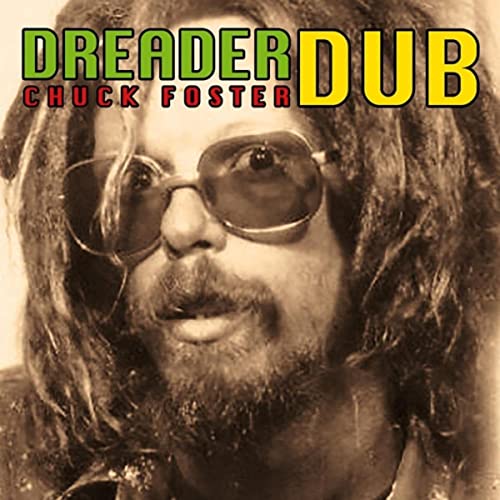 Chuck Foster is an influential reggae pioneer in the USA, with an impressive list of achievements to his name. As a long-time host of Reggae Central on radio KPFK in California, he was and still is one of those people who brings the reggae vibes to the people. In addition, he has a long track record as a musician and writer. Dreader Dub, his latest album, released as usual on his own Catch Me Time Records, is the dub version of his album Love Foundation, released last year. That album (review here) is a typical, no-nonsense reggae album, averse to all kinds of gimmicks, but written and brought from the heart, accompanied by experienced session musicians.

As is generally known, dub is the pure and raw ‘version’ of reggae. Stripped of all kinds of elements, such as vocals and certain instruments, but edited, distorted, and provided with sound effects, listening to dub versions often becomes an exciting experience, but can also have a relaxing effect. Chuck’s new album offers the whole range. It takes some effort to ‘link’ the vocal versions to the dub versions, since -for a reason unknown to us- the track order on the two albums is not identical.

The dub workouts are solid, embedded in an appealing mix created by Mike Irwin and Chuck. The album captures the atmosphere of the pre-digital reggae/dancehall era. A typical element of Chuck’s productions is the frequent use of guitar solos, not always our cup of tea. We like the retro organ sound on several tracks! The gentlemen have not indulged in an abundance of sound effects, there is plenty of echo and reverb, and the pumping bass in combination with the drums propels the songs forward.

One of the first attention-grabbers was Analog Jam, the dub of Love Foundation. With its somewhat sinister atmosphere and the right combination of instruments, one of our favorites. Impending Doom -the dub of When Danger Comes– also went on repeat regularly! Tao Of Dub, the dub version of One Hand Washes The Other, comes in strong with ripping guitar riffs and a relentless chopping riddim guitar, gloriously complemented with a beautiful horns line. Those horns also open the catchy Ambience Chaser, which provides a relaxed moment on the album. Do check the excellent vocal version, Suspect In Custody, as well!

Another solid collection from the always reliable Chuck Foster.