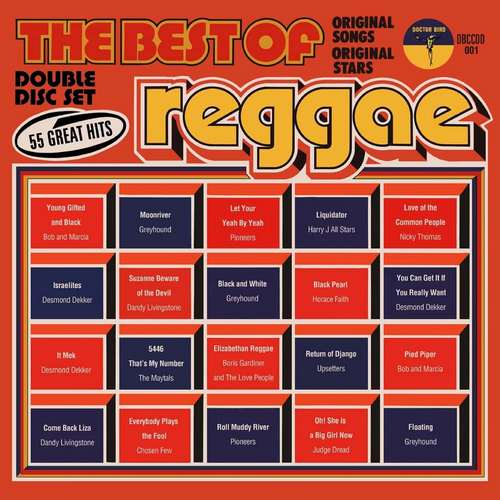 In 1973 K-Tel released a double lp, The Best Of Reggae, collecting 30 tracks, including numerous chart-busting hits and dancefloor-fillers, performed by some of the best-known Jamaican performers of the era. K-Tell was the brainchild of Canadian salesman Philip Kives who released in 1966 the company’s first compilation album, a collection of 25 country songs entitled 25 Country Hits. The idea of compilation albums was new, and the venture’s unexpected success led to further releases. Most of the compilation albums relied on the pop charts of the day, while some focused on hits from a specific genre, such as the 1973 double lp. It became a bestseller and introduced many young people to the catchy music from Jamaica.

Doctor Bird Records, a division of Cherry Red Records, specializes in vintage Jamaican sounds licensed from the legendary catalog of Trojan Records. One of their current releases is the expanded version of this album, a two cd package containing no less than 55 tracks. It will come as no surprise that this collection mainly consists of the best-known reggae cross-over hits from the late Sixties and early Seventies. To meet the taste of the white pop audience, strings, synths, or extended backing vocals were added to a number of songs. The most famous example remains Young, Gifted And Black by Bob Andy and Marcia Griffiths. Singer John Holt also made regular use of this, check the song The Further You Look. The producers often used covers of pop and soul hits.

Of course, the undiluted Jamaican hits are not missing. Check out and enjoy the Desmond Dekker hits Isrealites and 007 (Shanty Town) or the unadulterated rocksteady sounds brought by The Melodians and Lord Creator. You can also enjoy some popular, raw early reggae tunes such as Return Of Django by The Upsetters, The Maytals with 54 46 That’s My Number and Monkey Spanner by Dave & Ansel Collins. The Ethiopians’ rock-solid tune, Train To Skaville is also a timeless favorite on this album.

Although most seasoned hardcore reggae fans will not really get excited about this release, we still enjoyed hearing the golden oldies again