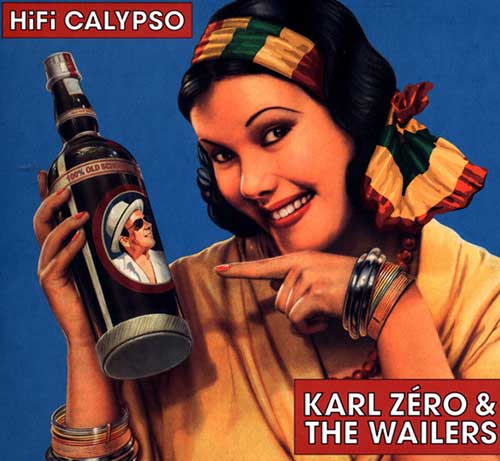 Now here is a curious item. Karl Zéro is a French writer, television personality who has made several rather curious records. This set was originally released in 2005 and certainly falls into that category.
This new reissue from French label Frémeaux probably would not have attracted my attention had it not been for the presence of The Wailers. They are not generally playing reggae though; rather, much of this set is Karl’s individual and enthusiastic take on the classic mento repertoire, and genuine mento banjo player Nelson Chambers even turns up on ‘Take Me Back To Jamaica’. Karl goes over-the-top with his French accent in places – he thankfully does not attempt to sound Jamaican, and sings in French occasionally – but it kind of fits; he is also helped out on backing and lead vocals by the equally unlikely-named female singer Daisy D’Errata. ‘Jump In The Line’ is a soca number, and the set actually ends with a unique take on ‘Rastaman Chant’.
I guess that The Wailers – Tyrone Downie, Al Anderson, Family Man Barrett, Glen DaCosta, Vin Gordon, and drummer Richacha – probably got a good payday for their work here. It seems unlikely that a set like this would even be recorded in these days of an awareness of cultural appropriation, but this is obviously not meant to be taken seriously; look at it perhaps as an historic document, and enjoy the musicianship and some good songs, and maybe it will lead some to check out the originals. Tourists used to buy albums like this when they visited Jamaica – Karl Zéro has completely reversed that situation!

Don’t come to this if you only want serious music!