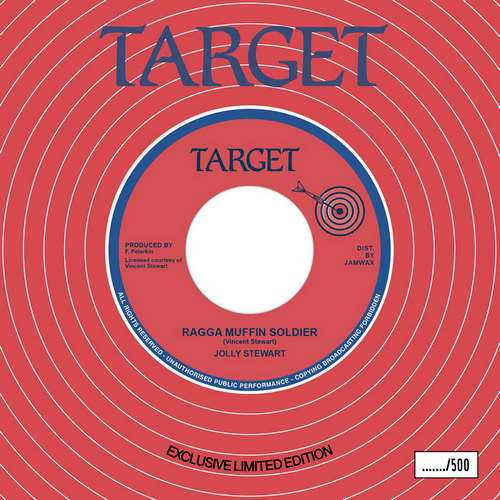 Jamwax Records from France was founded in 2013. They reissue lost treasures from the Jamaican & Caribbean music history led by their slogan ‘The Future Sounds Of Yesterdays Dreams’. One of their recent releases comes from Jolly Stewart aka Vincent Stewart. Growing up in the Waterhouse neighborhood of Kingston it’s obvious he adopted the Waterhouse singing style, known through artists like Mykal Rose, Junior Reid, King Kong, Tenor Saw, and more. He wasn’t a prolific artist, as far as we know he did a showcase album with Cassey Man, and cut tunes for labels such as Black Solidarity, Techniques, and Fitzroy Peterkin’s Target label. With the latter he released Ragga Muffin Soldier.

The tune is an early, powerful digi-styled killer tune, recorded at Channel One Recording Studio in 1983 with Soldgie as engineer and backed by a riddim track played by Jolly Stewart and Daniel ‘Axeman’ Thompson. The uptempo, almost aggressive style of the backing, is the backdrop for some serious conscious lyrical fireworks: “Raggamuffin soldier, big ina your area…me no deal with badness, me nah deal inna war, me is a raggamuffin soldier…mi raggamuffin ina foreign, raggamuffin sit down pon di riddim…how you know the raggamuffin? Me no wear no gold chain, me no wear no gold ring…”. It’s an outright ‘attack’ on the street violence of the Kingston streets. The flip-side carries the instrumental version, including a few vocal snippets.

The release comes nicely packaged, with the label and sleeve from the original release. Please note…limited edition only!