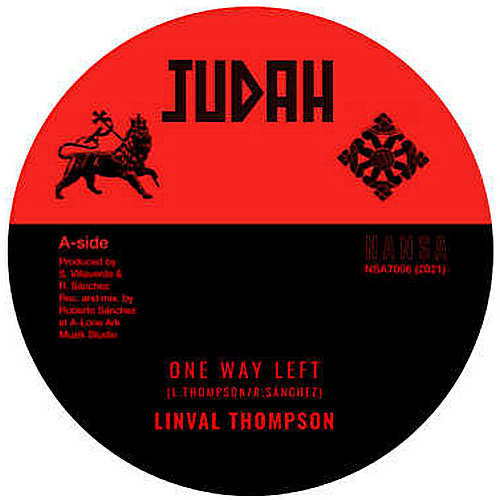 In May 2018, the Spanish production combo Roberto Sanchéz and Santiago Villaverde released a 7″ single on the Judah/Nansa Records label featuring the roots scorcher Give Jah Praise by underrated Jamaican veteran singer Sylvan White. The song was voiced over a sparkling riddim track which now re-appears as the backdrop for Linval Thompson’s new tune titled One Way Left.

With this message song, the highly respected foundation singer and producer claims that there’s only one way left for the new generation namely Jah Jah’s way. Listening to the vocal piece on this single it’s obvious that after all those years Linval Thompson still has the soul, the sound, and the power to deliver a strong tune. The conscious lyrics and catchy hook lines are sung with his instantly recognisable classic earthly tone to his voice. Give Jah Praise virtually transports the listener back to the second half of the 1970s and early 1980s, when he enjoyed the most successful time in his career as a singer.

As one might expect, the flip side brings the listener a wicked dub version of the Lone Ark Riddim Force’s riddim track created by Roberto Sánchez in his A-Lone Ark Muzik Studio. This time it’s solely the dubbed out version of the instrumental which implies there are no vocal snippets heard in the mix.

In all, another quality roots piece coming from the reggae connection between Spain and Jamaica.