Payoh SoulRebel – When The Day Is Cold / Dawitt – Jah Calling 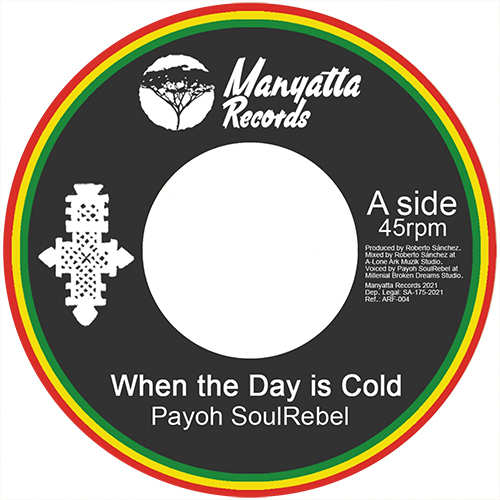 The summer of 2019 saw the release of the 7″ single Laredo Reggae Dubplates featuring Spanish artists Roberto Sánchez, Shanti Yalah, Inés Pardo, David ‘Dawitt’ Tarío, and Kamia Y Juza. The single was released by Manyatta Records from Spain, a non-profit record label that releases music on vinyl with the sole purpose of promoting culture and human values by supporting artists and their message, allocating all the proceeds to continue releasing works. In April 2021, the aforementioned single was followed by a 10″ platter featuring three vocal cuts by singers Linval Thompson, Kamia Y Juza, and David ‘Dawitt’ Tarío on the Too Much Pollution Riddim plus Roberto Sánchez’s dub version.

Now, six months later, Manyatta Records releases a 7″ single with two brand new vocal cuts on the 2019 lovely Laredo Reggae riddim. On Side A, it’s When The Day Is Cold by versatile Spanish singer Payoh SoulRebel, who already drew attention with his 2018 debut album for Cool Up Records entitled What A Vibe, which brings sweet vibes. With this tune he more or less continues the theme of his 2017 single Sweet Music, “We have the sweet Reggae music in our hearts and soul”. On the flip side, the listener is treated to a solid cut by singer, musician, and producer David ‘Dawitt’ Tarío, who revisits the Laredo Reggae riddim for his solo piece Jah Calling. In this song, he states that “Sweet Reggae Music is a calling from Jah”.

Both tunes were produced, recorded, and mixed at A-Lone Ark Muzik Studio by Roberto Sánchez for Manyatta Records.