Ras Teo – Back A Bush

Ras Teo – Back A Bush 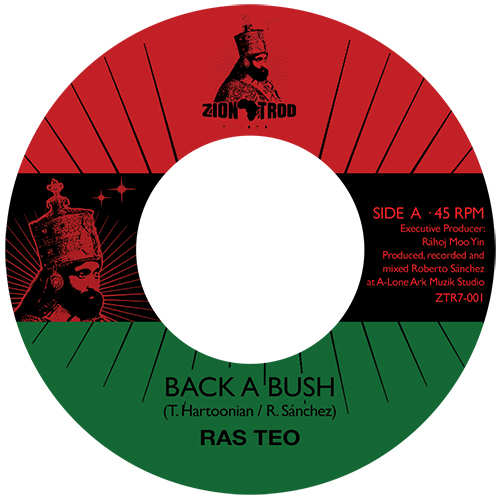 For its very first release, Ráhoj Moo Yin of Zion Trod Records – a brand new record label from British Columbia, Canada – has collaborated with A-Lone Ark’s Roberto Sánchez. The latter produced a cut of Ras Teo ((Teo Hartoonian) over a Roots rockers riddim by Lone Ark Riddim Force that was first used for the title track of Earl Zero’s 2010 album And God Said To Man.

Ras Teo is a true Rasta and a Roots teacher and that he again shows with the message tune Back A Bush. It’s a beautiful chant about the richness of nature in which the singer, who’s known for his commanding delivery, expresses his idea of living close to nature to uplift the mind and the soul. Not only with his delicate tone and conscious lyrics but also the riddim with its horns and intense drums takes the listener back to the golden era of 1970s Jamaican Roots music.

On the flip side the listener is treated to Back A Dub, a dubbed out version of the riddim track. It’s a tough dub piece King Tubby would have been proud of. It once again shows Roberto Sanchéz’s wizardry when he touches the knobs of his mixing board.

This single is a heavenly piece of Roots music that shouldn’t be overlooked.