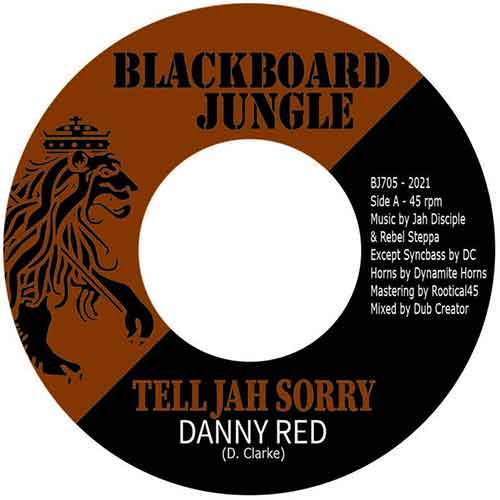 Danny Red was born in London to Jamaican parents but spent most of his childhood in Jamaica, where he became interested in reggae music and Rastafari. His career took off in the 1980s, first as a deejay and later as a singer. The tall and slim rasta, known for his authentic and raw vocal delivery, prefers working with independent producers, although he signed with major Columbia in the 1990s. During his musical career, he lived alternately in London and Jamaica. He is a welcome guest in the active English roots/steppers/dub scene and regularly records for European independent labels.

A few weeks ago a new single arrived on our desks coming from the French label Blackboard Jungle. This French collective was founded in 1994. Over the years they managed to build a good name and reputation as a sound system. Nowadays Blackboard Jungle is a sound system, label, studio, and the crew of Olivier (MC, singer), Nico (selector, operator) en Guillaume (boxman). Their goal is to spread the universal reggae vibes with messages of love, peace, and brotherhood.

The single Tell Jah Sorry, is a quintessential Danny Red effort, deep roots reggae pon an even deeper riddim. The music Jah Disciple and Rebbel Steppa is performed by DC on bass and horns by Dynamite Horns, mixing was done by Dub Creator. The mid-tempo track is propelled by the deep, penetrating bass, with the superb horns section providing a fantastic counterbalance. Danny’s voice navigates in between and in this way manages to create a balanced, somewhat threatening atmosphere. The flip side offers space for Jah Disciple’s talents. No lavish sound effects, but an exciting riddim, formed by a relentless, intriguing interplay of instruments.