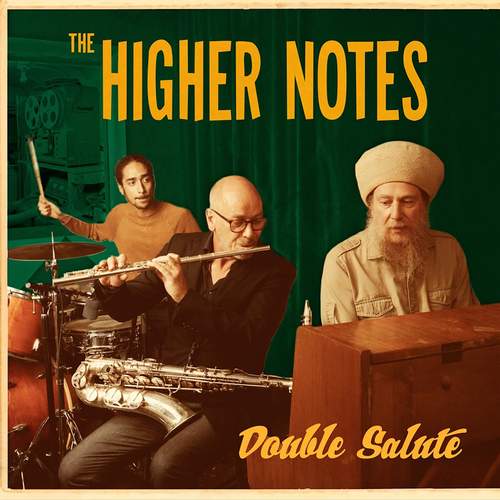 After the release of the album as digital download only,  “Double Salute” is now also available on vinyl. The LP can be purchased via Roots Unity Music’s Bandcamp page and at several record shops.

While just having gained their independence in 1962, rising out of the shadows of English Colonialism/Imperialism, Ska music was (and still is) Jamaica’s first National Music. Ska is a music genre which still has an impact on popular music today, close to 60 years later, being the root of every Jamaican music style that came after. You must be blind not to see the massive impact Jamaican music has had on music and production of music in general. It definately had its effect on Earth Works, a recording studio in Amsterdam, the Netherlands, set up by Ben King, a disciple of Jah Works UK. He has greatly succeeded his plan while also creating a work force of musicians and singers, all working together to create original material.

Out of the Earth Works studio comes a brand new album by The Higher Notes (King “Jan” Kooper, Ras P, Uta Maruanaya, Richard “High Notes” De Ruige, and Milan Van Wingerden) titled Double Salute. This 11-track album is a salute to the originators, creators, musicians, studios and producers of Jamaican Ska and Rocksteady as all of them had their own massive impact on the sounds which they created together in unity. By having creative arrangers like Tommy Mccook , Roland Alphonso and Jackie Mittoo, working together with determined producers like Duke Reid, Coxsone Dodd, and Prince Buster, they came up with unique uplifting original arrangements which continue to inspire, even up until this very day. Furthermore it’s a salute to the beautifully warm and carefully orchestrated sound of the 1950s, written by the likes of Duke Ellington and Billy Strayhorn, just to name two particular greats.

There are two adaptations on this album from this era, Solitude and Smoke Rings, all other songs on the album, including the previously released single Earth Shuffle b/w Crackle Ska, are original compositions. Double Salute is just a big labour of love for the music and sounds of back in the days, so it was with great care the band and producer picked the right instruments, amplifiers and microphones, particularly using microphone placement to create an authentic sound.