1. The Right Place
2. Pay Raise Feat. Skillinjah
3. Leave Me Alone
4. Wrapped Around Your Fingers
5. Waiting By The Water
6. No Justice, No Peace feat. Tiwony & Pipo Ti 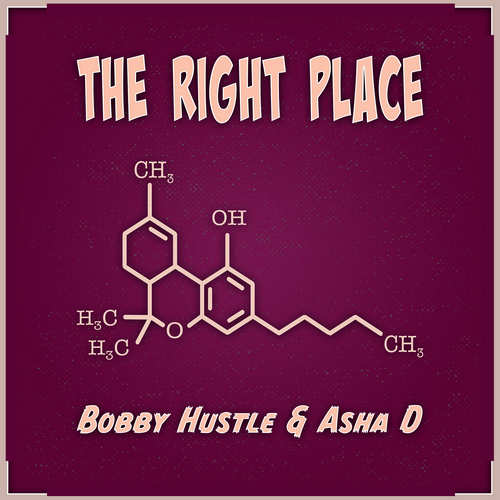 Bobby Hustle, the US reggae artist who in 2007 started working with Seattle, Whashington based Dynasty Records and in 2010 saw the release of his first song, That’s Right, on the Washington DC riddim from Bread Back Productions out of Jamaica, has managed to establish his name in the American reggae scene as well as on an international level. Ten years after his debut single hit the street, Bobby Hustle discovered the reggae instrumental sale site of Asha D, producer of the independent Artikal Music label. In the end, this led to the decision to collaborate and work on a common project. The fruits of their collaboration can now be heard on the Franco-American EP entitled The Right Place, which follows up Bobby Hustle’s July released Side Hustle EP, done with LuisDreadlocks (of Iya Terra).

Anyone familiar with Bobby Hustle’s works in the past decade who listens to the his new EP will experience that the artist maintains his typically well respectable levels. Things get started with the head-nodding title track The Right Place. As usually, Bobby Hustle has no shortage of lyrics and has a nice flow while seemingly effortless riding Asha D’s riddim track. The next track, the previously released single Pay Raise which is dedicated to all hard working people worldwide, features a guest appearance of US singjay Skillinjah. While Bobby Hustle strikes again with a potent chorus, Skillinjah shows that he’s a top lyricist. Although a song with a title like Leave Me Alone could easily be a lover’s piece, this one deals with a well-known subject in reggae music, Babylon. Without a doubt, Leave Me Alone is one of the biggest tunes on the entire EP. And then, there’s the already expected love song, actually there are two of them. First comes the slow-paced Wrapped Around Your Finger, a really nice song with clever lyrics. Very cool and calm vibes are around the fully convincing Waiting By The Water, with the singer expressing that he wants to go back to the day, back to the place, before at all changed, and they did it all the way, with his heart waiting by the water for the one he loved – a delightful love song and a clear highlight here. The EP is rounded off by No Justice, No Peace, a solid tune done in collaboration with Tiwony from France and Pipo Ti from Spain that just like Pay Raise was previously released as single. The song speaks for itself, denouncing police violences and all the inequalities that follow in terms of justice.

Unfortunately the common project by Bobby Hustle and Asha D has led to the release of an EP and not a full-length album, but because it’s nice we just play it twice!