The Freedom Chanters – Gone Is Love

The Freedom Chanters – Gone Is Love 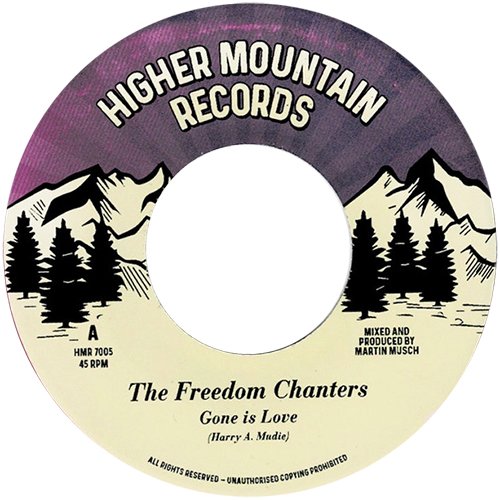 On the eve of a new year, Higher Mountain Records have released The Freedom Chanters’ wonderful rendition of the song Love Is Gone aka Gone Is Love. In 1972, the under-celebrated Harry A. Mudie, the first reggae producer who dared to add lush string arrangements to some records, produced and released John Holt’s Gone Is Love. Although Holt’s vocals perfectly express the plaintive agony of love gone wrong, it’s The Heptones’ Love Without Feeling riddim itself that shines bright.

The same year, a German Schlager singer named Inge Larsen came to Jamaica for vacation. There she met the deejay I Roy, who brought her to Harry Mudie’s studio where, in the end, the producer took her into the recording booth. There she recorded a couple of tunes in English (Everybody Knows and Gone Is Love) and also in German language. The song Es Klingt Sonderbar on the It May Sound Silly riddim was released as a solo single and also as collabs with first John Holt and then I Roy. However, it was her cover of John Holt’s Love Is Gone, retitled Gone Is Love, that became her best known and most appealing single.

Almost fifty years after its original release, Gone Is Love has been given new life by The Freedom Chanters and Ancient Mountain All-Star from out of Germany (sic). The latter flawlessly play the horn-driven minor-key roots riddim while the former stay close to Inge Larsen’s icy, slightly monotone vocal delivery. The musicians involved as well as The Freedom Chanters, a vocal trio consisting of two female and a male voice who revitalize the classic Jamaican sound of the ’70s, have done a really good job in doing the strength of the original version fully justice. Ancient Mountain All-Star’s Version on the flip side of the single is a joy to listen to as it pulls a great vibe.