Earl 16 – In The Dancehall / Prince Alla – Fight For Your Right

Earl 16 – In The Dancehall / Prince Alla – Fight For Your Right 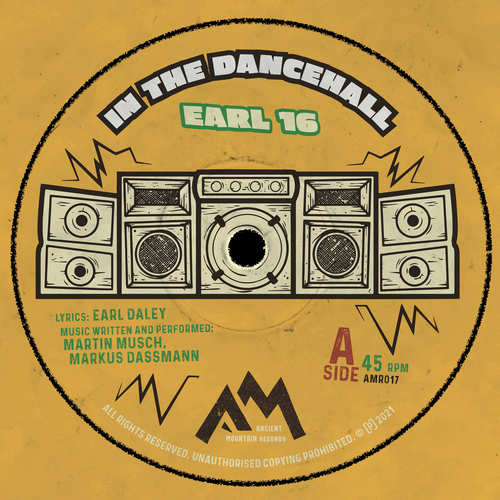 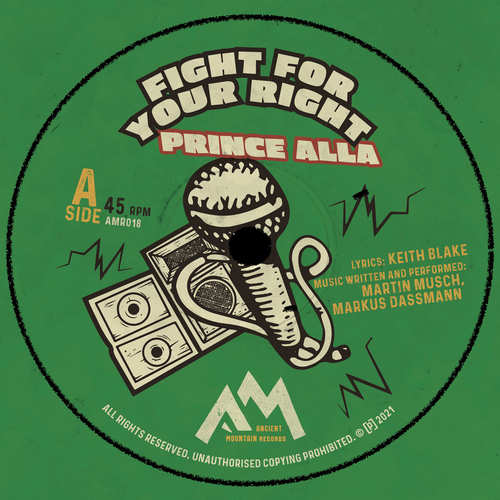 After the release of The Freedom Chanters’ wonderful version of John Holt’s Love Is Gone/Inge Larsen’s Gone Is Love, the German reggae label Ancient Mountain Records continues to put out 7″ vinyl. This time they have teamed up with veterans Earl 16 and Prince Alla to deliver reggae goodies. While the recording career of Earl John Daley, better known as Earl 16 or Earl Sixteen as his artist name is also spelled, took off in 1975 with his debut solo single for Phonso’s Globe International Leggo Off Of That, the eight-year older Jamaican roots singer Keith Blake aka Prince Alla (sometimes Prince Allah or Ras Allah) re-entered the music scene that same year with the single Born A Fighter for producer Teddy Powell.

Still in his teens and going to school, Earl 16 formed the group The Flaming Phonics of whom he was the lead vocalist. It was with the Winston McAnuff penned song Malcolm X, recorded for producers Joe Gibbs and Derrick Harriott, that he started to gain some recognition. In 1977, he joined Boris Gardiner’s group, The Boris Gardiner Happening, which brought him into contact with Lee “Scratch” Perry for whom he recorded four tracks at the Black Ark studio, including the original recording of White Belly Rat. There he also met Earl Morgan of The Heptones, who later produced his album, Shining Star. In the early 1980s, he recorded singles for a variety of producers including Linval Thompson, Augustus Pablo, Clement Dodd, Sugar Minott, Yabby You, and Derrick Harriott, and recorded his debut album entitled Reggae Sounds with Mikey Dread. He teamed up with Roy Cousins for two albums, Julie and Special Request. Earlier material recorded for Studio One was released as a Showcase album. Since 1985, he resides in the UK where he worked with producers such as Mad Professor and Stafford Douglas and started his own label Merge Production.

In recent years, Earl 16 has also been working with producers in Europe like Roberto Sánchez, JahSolidRock, Bost & Bim, Rootikal Temple, Freddy Poncin, and Abendigo Records. And now, there’s his latest single In The Dancehall which is produced by Martin Musch for Ancient Mountain Records. Accompanied by an awesome sounding original reggae backdrop with a killer bassline, Earl 16’s voice sounds amazing as it always does. Without a doubt, he’s one of the classiest reggae singers which makes it a joy to listen to his songs. In The Dancehall, a nice effort with cool and easy vibes, tells about playing a reggae tune in the dance hall to make you feel happy and have fun. Horns Version, the instrumental on the flip side, is so nice to hear that you simply want to play it multiple times.

Prince Alla’s recording career began in the late ’60s as a member of the vocal group The Leaders with Milton Henry and Roy Palmer. In 1969, his Rastafarian faith did him withdraw from the music scene and saw him getting heavily involved and living in Prince Emmanuel Edwards’ camp at Bull Bay. After his comeback single for Teddy Powell, he started working with Bertram Brown’s Freedom Sounds, recording songs like Bucket Bottom, Lot’s Wife, and Stone, which are now regarded as roots reggae classics. At the age of 71, he’s still active and capable of recording noteworthy roots tunes as can be witnessed when playing his latest single entitled Fight For Your Right. At the age of 71, this esteemed roots singer’s voice is still in good shape. Coming across the same backdrop as Earl Sixteen’s piece, Prince Alla’s powerful message song definitely makes a lasting impression. The vocal is accompanied by its dub version titled Dub For Your Right, which is also a piece of candy for the listener.