Micky B – Cry For Love & Unity

Micky B – Cry For Love & Unity 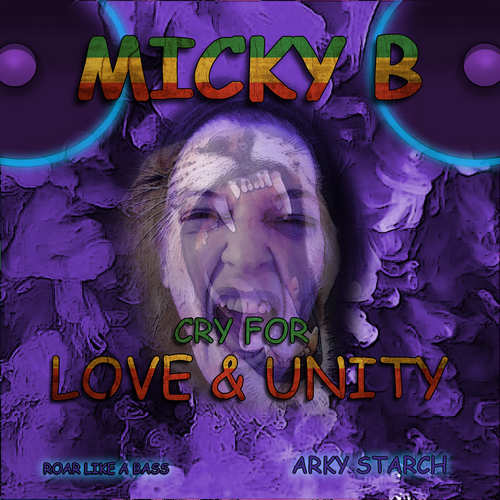 Micky B, born Mireille Boudewijns, is a songstress and songwriter from Antwerp, Belgium, who starts off the year 2022 with her 9-track debut studio album entitled Cry For Love & Unity. This Turkish/Belgian reggae artist, whose sweet vocal delivery and lyrics that deal with life, love and global issues from a female perspective, combines heartical messages and positive vibrations with a touch of militancy.

Cry For Love & Unity is the result of Micky B’s fruitful collaboration with Arky Starch, an accomplished bass guitarist who also plays guitar and keyboard. Born and raised in Turnhout, Belgium, he got his first bass guitar from his older brother first bass guitar in 1994. As a member of various bands, he honed his skills as a bass player and a musician and collaborated with Heartwash, Ion Youth, and Yosa (Dub Tales) to name a few. These experiences helped him expand his musical knowledge above and beyond the realms of just bass guitar and composition, harmonization, and the rudimentary components of Roots and Dub. In 2004, Starch began to focus on understanding the use of software, MIDI, and technology to create complex, intricate music. Since June 2020, he has worked with Jesse King aka Dubmatix, who masters all his songs and assists in building a solid sound for his musical production.

Getting things started on Micky B’s Cry For Love & Unity album, which benefits from the vibrant and bass-heavy backdrops laid down by Arky Starch, is the previously released earth-shaking single Power Abuse. Different vibes are coming in with the downright stellar social commentary Red Eyes, a tune of sheer beauty. The final tune on the opening of Micky B’s album, Babylon, deals with a very familiar theme in roots reggae music. In all, these three tracks form a very strong opening lot. The remaining six tracks maintain the quality standard set by the aforementioned tunes. Find It sounds as if it’s trying to climb out of your speakers and hit you on the head, which is a good thing because this tune is so nice to listen to, which by the way also goes for Release The Shackles. It’s the mind-bending Gravity that rounds off this album in a big way.

This album shows that the collaboration between Micky B and Arky Starch brings out the best in each other. Impressive debut set!