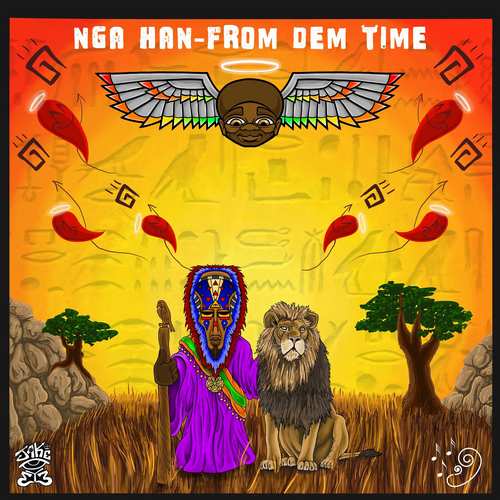 Buy Here
Nga Han, who hails from the Garden Parish of St. Ann, Green Hill district of Jamaica, has attracted the attention of European roots fans with singles such as King’s Joy, Go Down, Nazarene, UFO, Manchild, and Stumble & Fell, and the two full-length studio albums The Living Stream: Chapter One (Roots Unity Music, 2020) and – in collaboration with Belgium’s The Hi-Flyers – Emergence (Bona-Fi Records, 2020).

For his latest recording, From Dem Time, Nga Han teamed up with UK-based producer & musician David Arrowsmith aka I David. The vocals for the song, with Nga Han also playing the Binghi drum, were recorded at executive producer Rockin Rocco’s Rocco Studio in London. Next step was the release of From Dem Time on a 6-track 12″ vinyl platter by Universal Melody Records, a reggae record label formed by Rockin Rocco to spread heartical, spiritual, and positive music for the betterment of the world.

This 12″ vinyl release features lovely and potent sounds on both sides, to be truly heard at volume. It’s Nga Han whose superb From Dem Time is the first track that leaps off the speakers. The singer truly delivers a melodically pleasing offering for the listener’s enjoyment. Lyrically Nga Han continues to bring a song full of consciousness but compared with previous releases his vocal delivery sounds a bit different. He has a really nice flow on a well-crafted riddim with a throbbing bass, Binghi drum, and a nice slice of horn. The vocal cut is followed by a pounding dub with vocal inserts and effects. Next, it’s the Horns Mix that drops in, a moody instrumental version with the sax play coming to the fore.

The other side takes off with I David’s Melodijah, another worthwhile instrumental piece but this time with a Pablo-esque melodica. The two bass-led dub soundscapes that follow, the hard-hitting From Dem Dub and the matching From Dem Dub 2, do not disappoint and are worth going on repeat.