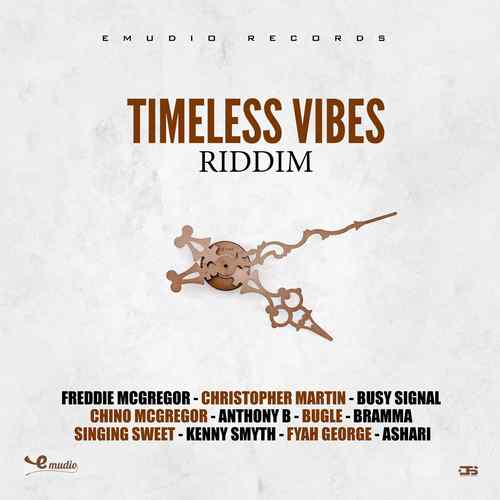 German producer Emanuel Schirmer, aka ‘German’, is known for his dancehall productions, including the Signature riddim that he released last year and the popular Genna Bounce riddim that hit the dancehalls in 2017. With hit singles for artists like Jahmiel, Govana, and Jada Kingdom, he knows how to strike the right chord with the dancehall audience. With his most recent effort, he is breaking new ground. The Timeless Vibes riddim is a smooth one-drop reggae riddim that he produced with musical assistance from legendary reggae veterans Freddie McGregor, Robbie Lynn, and Dalton Browne. The result is a perfectly arranged riddim that sometimes tends a bit towards overproduction, without it becoming really disturbing anywhere.

The riddim is voiced by a selection of contemporary artists, who have built up a good reputation in both the reggae and dancehall area. The mix of dancehall artists such as Busy Signal, Anthony B, Bramma, and Buggle and reggae vocalists such as Freddie McGregor, Christopher Martin, and Singin Sweet is a good choice as it offers enough variety. It should be noted that the dancehall artists ride the one-drop riddim in an admirable way.

With more than 50 years of experience under his belt, Freddie McGregor shows with Could It Be that he still plays an important role in the reggae scene. Chris Martin obviously does not miss out on his lovers’ tune Feel My Love, the tunes of Kenny Smith and Singing Sweet are cut from the same cloth. Busy Signal shows with Unite that he can easily bring a sensitive roots tune. Anthony B presents himself with his tune Not Giving Up as a roots artist with class, we didn’t expect anything else! Bramma and fellow deejay Buggle also deliver solid performances. Fyah George stands up for our music, reggae music: “It’s more worth than silver and gold, so don’t sell it out”. Nuff said & totally agree!