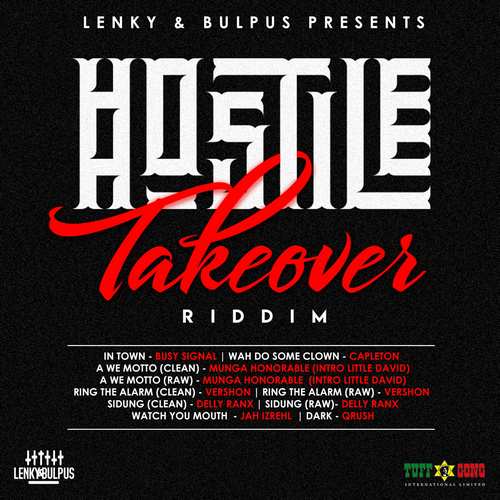 About two and a half years after the Fury Riddim, Lenky and Bulpus drop a mad dancehall trob entitled Hostile Takeover Riddim. Forget all those lacklustre dancehall riddims – in most cases sounding just the same – that flood the current market because this is the real deal! The Hostile Takeover Riddim is a bouncingly colourful backdrop with influences of hip-hop, reggae, and dub. The riddim is heavy and sounds like something coming from the early years of artists/producers Ward 21. Headed by stirring cuts from Busy Signal, who does his typically unpredictable brilliance, and the always fiery sounding King Shango aka Capleton, this selection brings the listener clean as well as explicit versions by Vershon, Munga Honorable, and Delly Ranx. All three artists deliver solid efforts with Vershon’s Ring The Alarm being the best cut, although the other two aren’t far away. Furthermore there’s Jah Izrehl, whose uncle is Little Twitch, with the decent message tune Watch You Mouth, before the somewhat disappointing Dark by Qrush rounds off this selection.

Without a doubt, Hostile Takeover Riddim is going to blow up the dance halls worldwide.

Capleton – Wah Do Some Clown