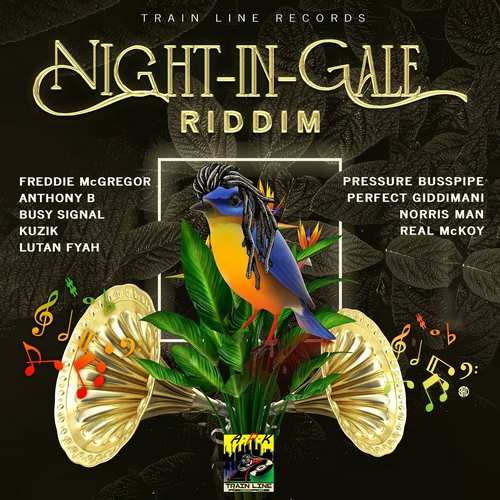 One of the record labels that you simply have to check when it comes up with a new project is Train Line Records. After years working in a Dub studio recording specials, Real McKoy founded his label in 2009. Since then, a plethora of music has been released by Train Line Records including – mostly good quality – juggling projects such as Swag Valley Riddim, Flight Risk Riddim Soprano Riddim, Magnitude Riddim, Reggae Train Riddim, Angel Eyes Riddim, Conqueror Riddim, Nutrition Riddim, and Emblematic Riddim.

As if to cement their reputation further, Train Line Records have decided to kickstart the year 2022 with a first-rate juggling project, a deft one drop reggae riddim entitled Night-In-Gale. The roster of vocalists includes some of the biggest names in reggae, of whom quite a number have regularly voiced cuts with the label during the past decade. All artists involved add something different to the riddim, which prevents boredom to set in and keeps this selection interesting throughout. Besides that it’s justified to rave about the riddim itself, because the Night-In-Gale is a classy effort in its own right. So wonderful to hear!

After Anthony B has opened with the solid Good Time, musically versatile Busy Signal and reggae veteran Freddie McGregor each shine in their own way. Busy Signal’s Place Ah Run Hot is a reality tune about how poverty, violence and chaos is inflicted upon us by Babylon system. Freddie McGregor lyrically touches the same theme but vocally he expresses himself in a different style. Both tunes are among the best this selection has to offer. Another highlight is Lutan Fyah’s Africa Shall Rise, a strong song in which he praises the Motherland in his instantly recognisable style. Don’t overlook Pressure Busspipe’s soulful True To Yourself either as this one is another winner you’ll find on this collection. A pleasant and exciting surprise is the song Real People Know Real by upcoming Jamaican vocal group Kuzik, which consists of Kamau, Johnny Kool, and Krysi Webb.

If this riddim project sets the standard for what’s to come in 2022, it’s gonna be a blessed year for all reggae fans!