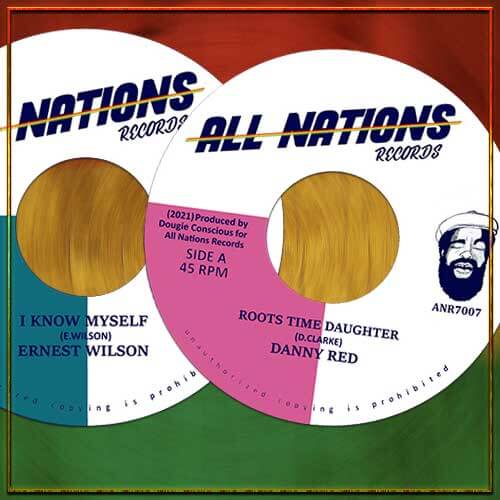 All Nation Records is a French record label, focusing on producing and editing heavy roots reggae music and dub music. The independent company is run by Simon Nyabinghi. He has made a name for himself with the Nyabin Sound System and releases on his labels Digital Rockers, VibesCreator, and Tablet Records. From 2019 his productions appeared on the All Nation Records label. Two latest releases were received this week, Danny Red’s Roots Time Daughter and Ernest Wilson with a remake of his classic tune I Know Myself.

Danny Red’s roots tune was produced at Conscious Sounds studio by master chief Dougie Wardrop. Dougie is the man behind many dub bands including Centry, Bush Chemists, Dub Specialists, East Meets West Messenjah and others. Delivering quality is his standard and we hear that loud and clear on this scorcher from Danny Red. He has been active in the UK reggae scene since the early 1980s and has developed into a versatile and much sought-after roots reggae artist. His catchy one-drop roots tune fires on all cylinders! The matching dub version ensures 100% listening pleasure!

Then there’s the release of Ernest Wilson. This widely respected Jamaican singer sadly passed away on November 2, 2021. He scored several hits, including Undying Love for Coxsone Dodd and I Know Myself for Channel One. With no intention whatsoever of surpassing Ernest’s original song, Simon Nyabinghi has rebuilt the tune entirely in his studio in 2022 style. The motivation behind this remake is to pay a fitting tribute to Ernest Wilson. After a few spins it can be assured that its remake is indeed an appropriate tribute. Listening to Ernest’s voice, it is once again abundantly clear that he is blessed with a soulful timbre, which evokes memories of American soul singer Teddy Pendergrass. The dub version is a moody instrumental version with vocal snippets fading in and out towards the end.