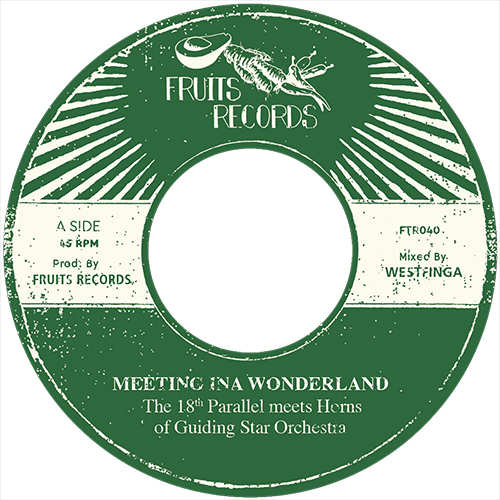 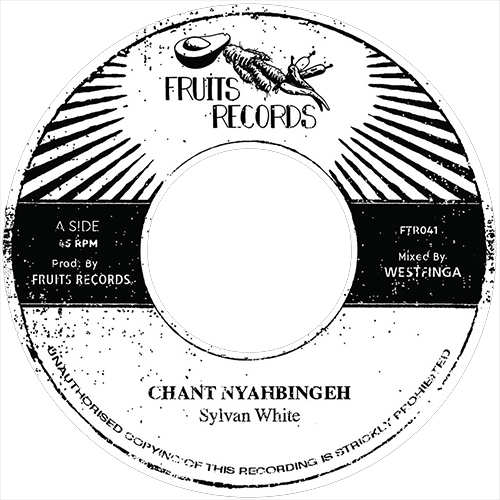 Thanks to ever-reliable Fruits Records, examples of great Reggae productions have once again come rolling down the Swiss mountains. This time it are are two new 7″ singles featuring The 18th Parallel’s collaborations with the horns section of the Guiding Star Orchestra from Denmark and Sylvan White, which after 2018 released Mother Nature on the Magnetic Buzz riddim is the second time they put out a single with the legendary early ’80s Roots singer from Kingston’s Greenwhich Farm area. Tracks on both singles are expertly mixed by French multi instrumentalist, sound engineer and machine builder Seb “Westfinga” Bzy, who has a passion for Reggae Dub music and whose favourite studios are Channel One Recording Studio and King Tubby’s.

This single marks the return of arguably one of the best riddims built by The 18th Parallel so far, the Wonderland Of Green riddim. This backdrop was first used in 2020 for two 7″ vinyl releases with cuts from The Silvertones (Wonderland Of Green) and Burro Banton (Living In A Wonderland). And now, it surprisingly reappears on a brand new 7″ single as the result of a collaboration with Danish crew Guiding Star Orchestra, what The 18th Parallel consider to be one of the best instrumental Reggae groups of our time. When they discovered their work through tunes like Upfull Melody, Natural Heights, and Planting Trees, they instantly liked Guiding Star Orchestra’s sound and creative process which turned out to be very close to theirs. The trombone-led instrumental Meeting Ina Wonderland features the four horns players of the group, who blow their instruments in an inspired, beautiful and powerful way with also solos that have a great appeal to the listener’s ears. Dubheads will be delighted when they turn over to the B side where Westfinga’s dubbed up version titled Dubland fires on all cylinders.

On the second vinyl platter we’re treated to Sylvan White’s original vocal signature, which hardly ever disappoints and is always a joy to listen to. Across an ’80s synth oriented dancehall rub a dub type of riddim played by The 18th Parallel, this fine roots singer sings about his faith in Rastafari and shares his knowledge of the traditional culture, the mystic of the Nyahbinghi drums. The riddim is heavy and powerful and is the perfect vehicle for Sylvan White’s vocal and lyrical delivery. Almost forty-five years after his first song was written, recorded, and released on the Freedom Sound label in 1978, this veteran in the business shows that he’s still in good shape. Westfinga’s old skool dub version, Dub Nyahbingeh, with vocal snippets coming in and out of the mix is a real killer.

These two great singles simply have to be part of any reggae collection.