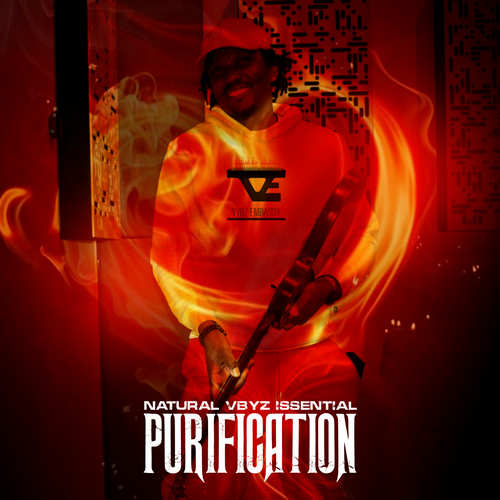 Two years after the release of his 17 track sophomore album 20/20 Vision, up and coming US. based St.Lucian reggae singer/songwriter Naturalvybz Issential aka N.V.I. follows up that in Africa (in particular Nigeria, Gambia, and Ghana) well-received collection of roots tunes with his third album entitled Purification which is released on the Vybz Embassy label.

Naturalvybz Issential, given name Morgan Jankie, had his first solo at the tender age of eight. Music was always close by and he embraced it to the fullest. As age brought experience, the young Naturalvybz started nurturing his talent on sound systems in St.Lucia. Reggae and Dancehall music had great influence on the island and so the young artist naturally gravitated to it. He began learning the art of music playing and composition when he was 12 years old. At the dawn of the millennium, he migrated to the US where he became part of Silver Bullet Sound System in Brooklyn and before long started recording. His debut album Good Side Of Life was released in 2017 and made that he was recognized as a much promising reggae artist. Naturalvybz Issential is set to embark on his first African tour in May, before heading to Europe for the summer.

Five years after his first studio album, he’s ready to take the next step in his music career which should further solidify his reputation as a force to reckon with in the competitive reggae arena. Naturalvybz Issential, who by now has written, composed and recorded hundreds of songs, presents his new 14 song project. The album was done with the help of musical director Calvin Reid while backing vocals were provided by Tony Ballard and Nikki Burt.

In the songs on Purification, he praises the Most High and addresses some current issues that negatively impact our society and thus harm people. Some of the tracks such as the opener Hail Jah, the powerful title track Purification, and the wonderful Babylon Place get instant replay, while others need several spins to get the listener’s full appreciation. Amongst these tracks are the collab with the deejay Junior Cat called Beat The Odds where the interaction between his vocals and Junior Cat’s rap takes the song to the next level and High On Life, both coming on Afrobeat fueled riddims. One of our favorite tunes on the album is the captivating song 40 Life, which speaks out not to give up despite constant setbacks.

In all, Naturalvybz Issential’s Purification is a solid conscious reggae album throughout.