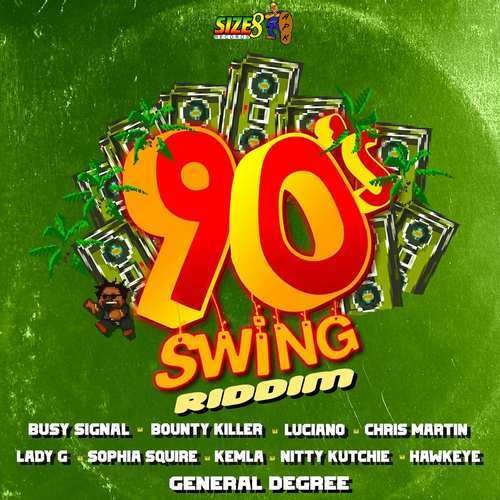 Snapple Daple aka General Degree has put on his producer’s hat and takes us back to the dancehall sounds of the late ’90s with his brand new juggling project which is aptly titled 90’s Swing Riddim. It reminds of the days when Danny Browne’s Main Street Crew with artists like Red Rat, Goofy, Buccaneer, Chico, Richie Stephens, General Degree, and Chrissy D were at the top of the game. Some of them are featured on this very infectious dancefloor filler, which is voiced by veteran dancehall artists like Nitty Kutchie, Hawkeye, Lady G, Bounty Killer, and General Degree himself. All of them played their role in the dancehall craze that took place in the latter half of the ’90s. Furthermore, this juggling features current chart-topping artists like Busy Signal and Christopher Martin.

Known as The Warlord, The Five Star General, and The Poor People Governor, Rodney Price aka Bounty Killer, one of dancehall’s most respected icons, starts the juggling with the massive Street Smart, which is followed by Busy Signal’s matching Kak Up. The only disappointing piece on this set comes from the Messenjah Luciano, who shouldn’t try his hand on these kinda riddims. Next comes the enjoyable Good with Christopher Martin seemingly effortless riding the riddim. General Degree rounds off the first half of this selection with the fun track Pon Di Riddim.

The second half kicks off with the first female contribution, Sophia Squire’s positive tune called Be Alright which gives a fine exhibition of her abilities. Then it’s time for tunes by Hawkeye and Lady G, who just like General Degree are former members of successful 1990s dancehall label Mainstreet Records. Hawkeye delivers a nice gyal tune, but it’s dancehall veteran deejay Lady G who definitely shines much brighter than her male colleague with Live It Up. Next comes rather unknown female singer Kemla who delivers a decent party tune before Nitty Kutchie, a former member of the Scare Dem Crew, takes over with the mediocre Links Every Weh. General Degree puts his best foot forward on his second cut on the riddim, Battlefield, which rounds off this juggling project in fine style & fashion.

Kudos to General Degree for producing a riddim selection that in fact is a return to the dancehall sound of a regrettably lost era.