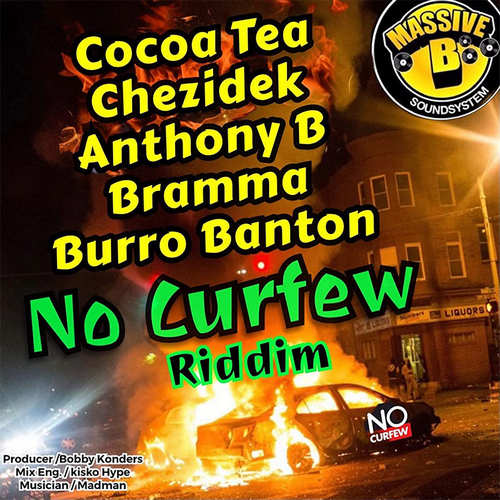 Bobby Konders of Massive B returns with a brand new juggling project entitled No Curfew Riddim, a relick of the much versioned classic riddim that underpinned The Wailing Souls’ Studio One scorcher Things And Time, which in 1999 was successfully used by producer Donovan Germain for Beres Hammond’s Can You Play Some More and also had cuts from Buju Banton, Tony Rebel, Morgan Heritage, and Beenie Man to name a few.

This new version of the riddim laid by Madman Myrie doesn’t differ much from the one that appeared on Donovan Germain’s Penthouse Records and thus fond memories of the Beres Hammond tune and the singer’s wicked collab with Buju Banton called Pull It Up instantly come to mind.

Bobby Konders taps a fine roster of vocalists to deal with the riddim including Massive B regular, di original Burro Banton, with whom he has worked extensively since the mid-’90s. The theme of almost every song deals with happenings and vibes in the dance hall. It’s Cocoa Tea’s previously released single Weh Ya Gone that gets the juggling going in really fine style before Chezidek delivers the entertaining Money Pull Up. Even after several listening, Anthony B’s Turn Up The Music doesn’t manage to make a good impression which is a bit disappointing. Luckily it’s followed by Bramma’s Dance A Buss which returns to the level of quality set by the first two artists. Burro Banton, the deejay known for his very aggressive style, comes forward with his deep, gruff voice and reaches a scintillating level with his awesome message tune titled $5 Badness. The set is rounded off by Madman Myrie’s instrumental version of the No Curfew Riddim.

The No Curfew Riddim once again shows that Bobby Konders simply knows which classic riddims to relick to please the listener to the fullest.