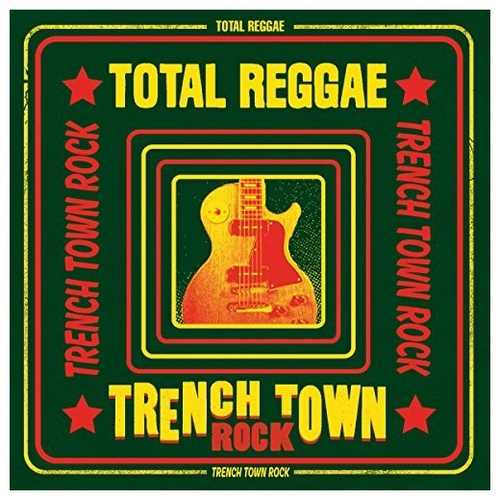 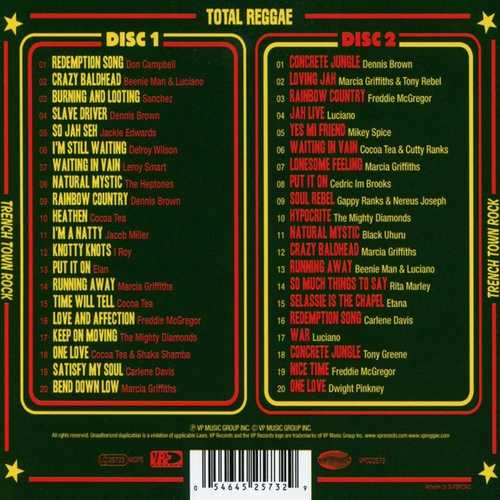 Over the years VP Records has become the major player in reggae music, and boasts what is reputedly reggae’s largest back catalogue. In recent times the company has issued several interesting releases from that huge catalogue. The “Reggae Anthology” series is a truly impressive effort from the company, with outstanding releases such as Barrington Levy’s “Sweet Reggae Music 1979-84” and Yellowman’s “Young, Gifted & Yellow”, the latter even with a bonus DVD! A few years back they started a brand new series called “Total Reggae”, a bargain priced collection of double cd’s, focusing on several sections in reggae music. It seems that they have revived the series with a new volume called “Total Reggae – Trench Town Rock”.

Bob Marley was the first ghetto superstar, responsible for introducing Jamaican music to a mainstream audience. He was born on February 6, 1945 in the community of Nine Miles in Jamaica. Bob grew up in Trenchtown, a Kingston ghetto area where he met Bunny Livingston, Peter McIntosh and Junior Braithwaithe with whom he formed the The Wailers. Braithwaithe left the group after some time. From the early ’60s, they had all attended the informal sessions at the yard of Joe Higgs, who became their mentor. In 1962, Bob Marley recorded a few tracks for producer Leslie Kong but these weren’t successful. Late 1963 The Wailers auditioned at the legendary Studio One. For Studio One producer Clement ‘Coxsone’ Dodd they cut some excellent sides such as “Simmer Down”, “Put It On” and the first (ska) version of “One Love”. In February 1966, Bob left Jamaica for the United States to live with his mother. After eight months he returned to Jamaica with sufficient funds to start his own label.

After some self produced material including songs such as “Nice Time”, “Mellow Mood” and “Hypocrites”, The Wailers started to work with producer Lee ‘Scratch’ Perry in the late ’60s. These sessions resulted in some of the finest material recorded by The Wailers including tracks like “Soul Rebel”, “Duppy Conqueror” and “400 Years”. After The Wailers found out that Perry sold the material to Trojan Records in the UK their relationship was soon terminated. Via a link with singer Johnny Nash and Danny Simms, The Wailers recorded a single for CBS Records, “Reggae On Broadway”, which failed. The single made The Wailers reach up in London where they visited Chris Blackwell’s company Island Records. He gave The Wailers and advance of 4,000 Pounds to record an album in Jamaica. At Harry J. Studio The Wailers invested every cent in this album. In 1972, “Catch A Fire” was released as The Wailer’s debut album for Island Records. The tracks which were recorded in Jamaica had been overdubbed by Blackwell in the UK with rock musicians and Blackwell also marketed the album as a rock album by packing it in a sleeve in the form of a Zippo lighter.

Along the way, both Peter and Bunny left The Wailers and the group became known as Bob Marley & The Wailers releasing legendary albums on Island such as “Natty Dread”, “Babylon By Bus”, the excellent “Live”, “Rastaman Vibration” and of course masterpiece “Exodus”. Bob Marley & The Wailers toured the world extensively and during their 1980 tour they pulled large crowd. In Italy they even performed in front of 100,000 people. Towards the end of the year Bob fell ill and cancer had been identified. On May 11, 1981 Bob Marley died, after he had been granted Jamaica’s Order of Merit as a reward for his achievements for his mother land Jamaica. Bob was given a state funeral.

“Total Reggae – Trench Town Rock” is phat packed with 40 excellent tunes from past and nearby present and it’s obvious that every listener will find some of his/her personal favourites here. Songstress Etana does the incredible “The Chapel” aka “Selassie Is The Chapel” (the original being Elvis Presley’s “Crying In The Chapel”). Sweet voiced Jamaican balladeer Jackie Edwards (he recorded one of the first albums for Island Records founder Chris Blackwell) is featured on “So Jah Seh”, a tune written by Bob’s wife Rita Anderson and originally featured on the “Natty Dread” album. The vocal harmony trio The Mighty Diamonds perform “Keep On Moving” which is actually a Curtis Mayfield composition. The song was recorded twice by Bob for Lee Perry. In 1969, the track was recorded for the first time together with tracks such as “Soul Rebel”, “Duppy Conqueror” and “Soul Shake Down Party”. Perry sold the tracks to Trojan Records and they immediately released the tracks on the “African Herbsman” and “Soul Rebel” albums. After The Wailers found out about these releases, their relationship with Perry immediately ended. In 1977, Marley re-recorded the tune with Lee Perry and Aswad in London during his stay there after the assault on Marley in his house on 56 Hope Road in Kingston, Jamaica.

During Bob’s lifetime only a handful of reggae artists versioned his songs. Jacob ‘Killer’ Miller (longtime friend of Bob) used his ‘Soul Rebel’ riddim for the awesome tune “I’m A Natty” for producer Joe Gibbs and soon I Roy versioned this one as “Knotty Knots”. The same riddim was used by Gappy Ranks and Nereus Joseph in 2009 for their hit single “Soul Rebel” . Bad boy Leroy Smart recut Bob’s “Waiting In Vain” for Channel One’s Hookim brothers and this version became an instant hit. They also produced the “Natural Mystic” do-over by The Heptones. The late great Delroy Wilson recorded the ultimate do-over of “I’m Still Waiting” in 1976 for producer Lloyd Charmers. Dennis Brown, hailed as the “Crown Prince of Reggae” in deference to Bob Marley’s kingly rating, is present here with several fine tunes. “Slave Driver” is his 1979 interpretation of Bob’s anthem. In 1993 Trojan Records put out the Dennis Brown & Janet Kay album “So Amazing”. From that set comes his version of “Concrete Jungle” from Bob’s “Catch A Fire” album, their debut set for Island Records. In the nineties he recorded the “Rainbow Country” single in London for the Saxon Sound. Great lick! Freddie McGregor also recut the tune for a UK production house, the Stingray camp.

Cocoa Tea is responsible for no less then four tunes. “Heathen” was a top notch Bobby Digital production, the synth based production of “Time Will Tell” is not our cup of tea, so fast forward to “One Love” , a duet with Shaka Shamba inna ballad style, nice one! His combined tune with Cutty Ranks – “Waiting In Vain” – was a considerable chart success. Personal favourites here are the big ’90s tune by Luciano and Beenie Man: “Crazy Baldhead”, courtesy of Sly & Robbie, “Loving Jah”, one of the many versions of “Forever Loving Jah” in 2001, and Black Uhuru’s 1977 recut of “Natural Mystic”.