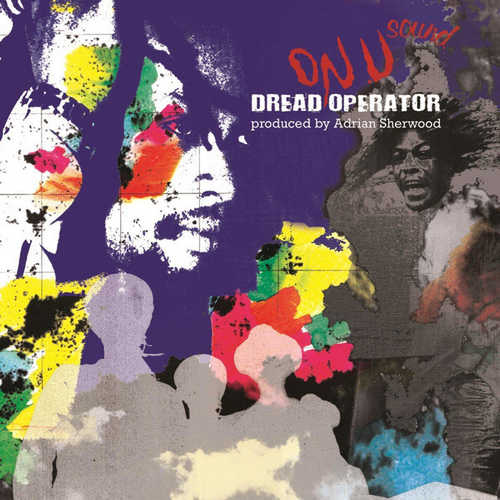 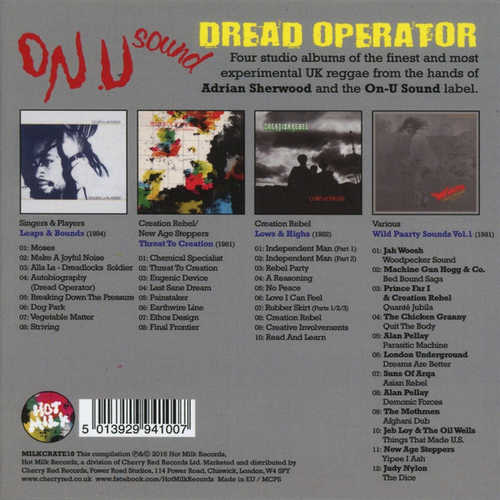 After having worked for UK distributor Carl Palmer in the mid-70s, 1958 born Adrian Sherwood started running the Hitrun label in 1978 on which he released Jamaican-recorded music by the likes of Bobby Melody, Carol Kalphat, Prince Far I to name three. Two years later, in 1980, the young record producer formed his own On-U Sound label which enabled him to put out production works of his own. By fusing elements of reggae with rock, dance and funk influences he soon achieved a coherent and individual production style. Unique, maverick and massively respected, On-U Sound became one of the UK’s most important independent labels. It was home to acts such as Tackhead, Dub Syndicate, African Head Charge, The London Underground, Little Annie, Creation Rebel, Mark Stewart, Gary Clail, New Age Steppers, Audio Active, Asian Dub Foundation, and the dub collective Singers & Players.

On-U was a by-word for experimentalism, spewing forth incredible, far-fetched, sometimes completely baffling tunes, never straying far from the cutting edge. Primarily associated with the sound of ‘dub’, the label’s heritage is far broader, with many of its artists having backgrounds in punk & post-punk, industrial, hip-hop and funk where the cross-pollination of punk experimentation and Jamaican dub has mapped out the innovative, culturally exciting territory the label has covered over the years. On-U Sound has released over 100 albums and singles. The label’s influence upon a younger generation of musicians, not to mention the ambient/techno style in general, has proved enormous, helping to fuse dub with both the independent rock and post-punk scenes.

Adrian Sherwood is also known for remixing a number of popular acts such as Coldcut, Depeche Mode, The Woodentops, Primal Scream, Pop Will Eat Itself, Sinéad O’Connor, and Skinny Puppy. He is co-founder of Carib Gems and Pressure Sounds, and founder of Hitrun Records as well as Green Tea Records and Soundboy Records. In 2003, Sherwood released his first album as a solo artist, “Never Trust A Hippie?” which featured collaborations with various artists such as Sly & Robbie, Steven Marsden, Carlton ‘Bubblers’ Ogilvie and Jazzwad. A second solo set appeared in 2006.

The first disc – “Leaps & Bounds” – is from the collective Singers & Players. It was released in 1984 which intended to bring together a loose collective of vocalists, deejays, musicians and engineers. Part of this collective were people like Bim Sherman, Prince Far I, Jah Woosh, Mikey Dread, Roydel Johnson aka Congo Ashanti Roy, Tony Phillips, Clifton “Bigga” Morrison, Carlton “Bubblers” Ogilvie, and Style Scott. The album opens with two spritual tracks by vocalist Congo Ashanti Roy. “Moses” is a beautiful tune with great harmony vocals, followed by the matching “Make A Joyful Noise”. With “Breaking Down The Pressure” Congo Ashanti Roy delivers another excellent roots track. Prince Far-I is featured on the awesome weird “Alla La-Dreadlocks Soldier”. He was brutally murdered at his Jamaican home on the 15th of September 1983. Jamaican producer, dub master and vocalist Mikey Dread provides vocals on the self-reflecting “Autobiography (Dread Operator)” and the solid “Vegetable Matter”.

Disc 2 is 1981’s “Threat To Creation”, a Creation Rebel/New Age Steppers double billing dub adventure. Looking back it’s justified to say that this is the most daring dub album to emerge from the UK. The bass lines are painstakingly deep, the echoes are dark & endless, drums that come out of the dungeon and guitars that tear up the structure of the song make this an album only for the brave and mighty! Some dubs can be traced back to their ‘original’ tune. “Last Sane Dream” uses “Devious Woman” by Bim Sherman. “Eugenic Device” uses the melody of “My Guiding Star”, while “Ethos Design” decomposes The Abyssinians’ “Satta Massagana” with conviction and intelligence. Sublime set!

Over to disc 3. Once again Creation Rebel on the case with the 1982 album “Lows & Highs”. Totally different from the aforementioned 1981 set. It’s the most straightforward album in the box. The set features vocals from Crucial Tony and Lizard Logan and Style Scott lays down the beats next to Eskimo Fox and Donald Campbell, and Deadly Headley blows away on his horns yet again. Includes the bonus track “Read And Learn”, the B-side from the “Love I Can Feel” 7” single. The first two tracks take on Bob Andy’s “Unchained” riddim, and John Holt’s “Rebel Party” and “Love I Can Feel” are included as well. Check out some experimental vibes “Rubber Skirts Parts 1,2,3” and on “Creative Involvements”.

Disc 4 is an astonishing collection of Adrian Sherwood’s mind twists, production wise and musically wise. Released in 1981 it brings together tunes by reggae artists like gruff voiced reggae deejay Prince Far-I with the atmospheric “Quante Jubila”, deejay Jah Woosh who does the humorous “Woodpecker Sound” and hard to classify bands like Jeb Loy & The Oil Wells with Things That Made U.S. and The Chicken Granny who go wild on “Quit the Body” to name but a few. All tunes are very danceable, some of them hypnotic and seductive, but definitely worth while playing them LOUD!