The Rough Guide To Reggae 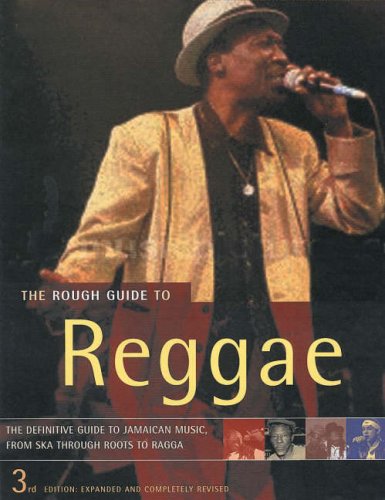 THE ROUGH GUIDE TO REGGAE

Steve Barrow’s and Peter Dalton’s The Rough Guide To Reggae’ is subtitled “The definitive guide to Jamaican music, from ska through roots to ragga.” And that’s what this book is all about, it will guide the reader through Jamaican music, starting with mento to hardcore ragga. It has an excellent layout with (black & white) pictures by top photographers Adrian Boot, Beth Lesser and David Corio and hundreds of record covers. The two authors have included interviews with several artists, producers and engineers : Dizzy Moore, Dobby Dobson, Brent Dowe, Sonia Pottinger, Larry Marshall, Delroy Wilson, Clancy Eccles, King Stitt, U Roy, Dillinger, Yabby You, King Jammy, Sylvan Morris, Scientist, and the dj Pan Head who was tragically killed in 1993.

Everything you always wanted to know about reggae music you can find here. Extended discographies, reviews, biographies, and a near to perfect evaluation of reggae music. The authors have covered in depth the unique phenomenon of the soundsystems, illuminating their pivotal role in the progress of reggae music. From the bewildering multiplicity of albums they have selected and reviewed the best, including plenty of singles compilations, as the 7″ single is still the main artery of Jamaican music.

‘The Rough Guide To Reggae’ has to be the only book to measure up to ‘Reggae Bloodlines’ published in the ’70s by Stephen Davis and Peter Simon. Steve Barrow’s and Peter Dalton’s love and affection for the music, artists and producers is present throughout the 400 pages, charting the music evolution, including ska, rocksteady, roots, dub, toasting, and lovers’ rock, as well as reggae’s offshoots in the UK, the USA and Africa.

The authors cover all aspects of Jamaican music, judging by the overwhelming amount of articles : ‘The Beginnings Of Jamaican R&B’, Rudy Boys And Rocksteady’, Wake The Town : How The Deejays Came To Rule The Nation, ‘Rebel Music And Rasta Chants’, ‘Nyabingi Music’, ‘Natty Dread Inna Greenwich Farm’, ‘Jammy’s First Rivals’, ‘Ragga Sing A Hit Song’, ‘New Roots: Rasta In The Dancehall’ and much more! Also included are a Jamaican chronology (1494-1995), a glossary of yard speech, and a list of books, magazines and reggae websites.

Steve Barrow and Peter Dalton have been involved in reggae music for over twenty years, Steve running the highly acclaimed Blood and Fire reissue label. They have delivered a more than essential book, highly readable (even for those new to reggae), and we strongly recommend checking out this work of almost frightening completeness.