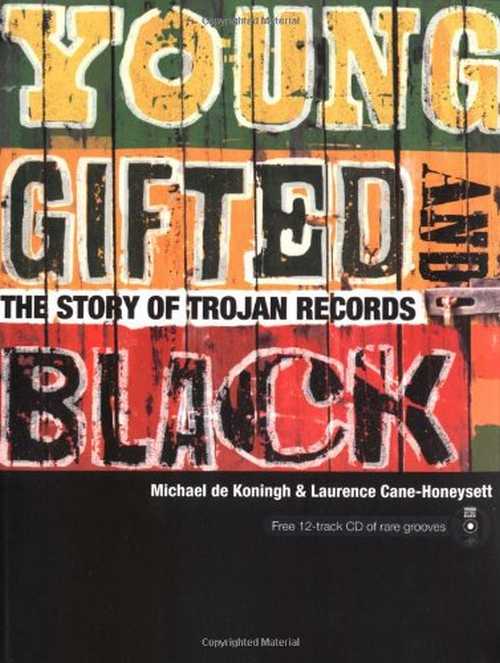 YOUNG, GIFTED AND BLACK – THE STORY OF TROJAN RECORDS

Recently we’ve been treated to some real noteworthy reading material, which altogether documents various facets of the history of Jamaican music. “Young, Gifted And Black”, subtitled “The Story Of Trojan Records”, is written by Michael De Koningh and Laurence Cane-Honeysett, with input from well-respected writer and reviewer Mike Atherton and Marc Griffiths, the latter being the author of “Boss Sounds – Classic Skinhead Reggae”. It’s the official story of the Trojan Records label and is released through Sanctuary Publishing.

A free 12-track CD of vintage Trojan grooves is also included (with track information in the book) and features fine classic tunes such as “Everything Crash” by The Ethiopians, “Poor Rameses” by The Pioneers, “You Don’t Know” by Bob Andy, “Melody Maker” by Keith Hudson and I Roy’s “Red, Gold And Green”.

The book provides a good insight into the origins of Trojan Records, the label that managed to introduce reggae music to the mainstream market and dominated the reggae explosion in the U.K. from 1968 to 1975. During their brief six-year existence, the label produced nearly 30 hit singles, created the legendary “Tighten Up” compilation and launched new acts like Jimmy Cliff, Desmond Dekker, Ken Boothe, The Pioneers, Bob and Marcia, Greyhound and Dave & Ansel Collins, all against a backdrop of cut-throat politics, cultural divisions, prejudice and entrepreneurial pressure. “The Story Of Trojan Records” is actually captured in three chapters titled Early Years (1), Windrush To 1974 (2) and 1975 To Date (3). In some 80 pages we are told about the formation and growth of the label, the culture that influenced its success and its eventual decline, and why Trojan Records still exists and successfully continues their reissue programme for the various types of reggae fan. Recollections from key characters in the label’s history – artists, producers and employees – have been the main source for this part of the book.

In the next two chapters we’re treated to “Music History” in a nutshell. Part 1 covers the 1950s to 1967 and tells about the evolution from “R&B To Rocksteady”, followed by a short overview of the years 1968 to 1972 in Part 2, subtitled “Reggay To Strings”. In Chapter 6 we’re introduced to the Mods (white counterparts of Jamaican Rude Boys) and the Skinheads, both “White Appreciators Of The Jamaican Sound”. Then starts the second part of the book which features a selection of colour photos, including original album sleeves, advertising and record labels and a variety of lists spread over almost 200 pages. The lists include “Suggested Listening”, “Suggested Reading” and “Label Profiles”. The reggae enthusiast will be particularly fond of the discography of all releases (including blanks) of all the labels owned by Trojan covering 7″ singles, 12″ singles and LPs. A book with some fascinating stuff, well worth checking out!!