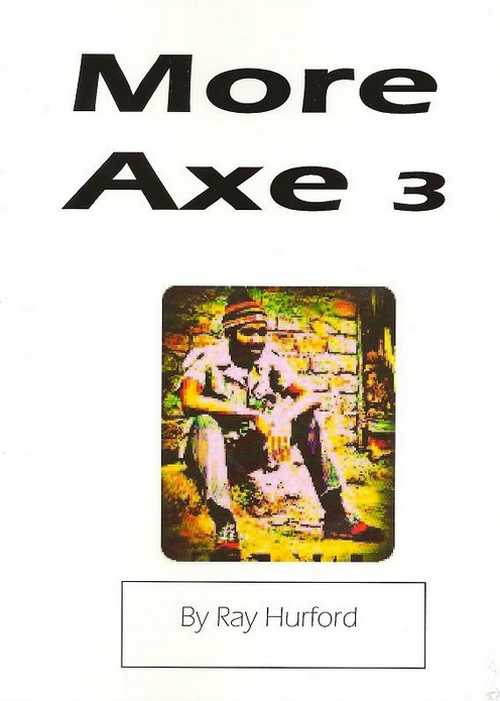 The year 2009 marked the long overdue return of Ray Hurford as a writer and publisher of books which not only contain useful information for the reggae fan, but also are a real pleasure to read. Starting off in 1987, Ray Hurford — mostly in association with the late Finnish publisher and writer Tero Kaski — has issued several acclaimed reggae books including “The Small Axe Guide” series with handy guides for “The Singers”, “The Deejays”, “Dub”, “Rock Steady”, and “Reggae 68-70”, and the “More Axe” series, which consists of the volumes 1, 2, 7 and 8. The “More Axe” series is intended to publish articles and interviews that were published in almost impossible to get original Small Axe reggae fanzines 1-28 in book form.

It all started almost on 29th September 1978 when Ray Hurford put out the first issue of the Small Axe reggae fanzine, which featured big names like Augustus Pablo and Gregory Isaacs. From then until September/October 1989, when the last edition of Small Axe was released, he issued 27 volumes of the magazine. After a hiatus of some ten years the Small Axe magazine was revived, but with the internet becoming a major medium to reach out to the masses it was obvious that Ray Hurford would put a stop to issueing the paper magazine once he had set up his own Small Axe website. Besides the Small Axe reggae fanzine Ray Hurford was also the man behind 20 issues of the Small Axe Files (1991-1992), which focused on one artist or aspect of reggae in every issue. Last year he published Beth Lesser’s “The Legend Of Sugar Minott & Youth Promotion”, a truly esssential book that shouldn’t be ignored by any self-respecting reggae fan.

From the very first start it was intended to publish articles and interviews already known from the reggae fanzine in the More Axe” Volumes 1-6, while the Volumes 7, 8 and 9 would contain new material due for publication but never printed. It explains the jump from “More Axe 1” to “More Axe 7”, and also why this “More Axe 3” is the fifth published book in the series. “More Axe 3” features an extensive article about Junior Byles, in which Ray Hurford — with help and contributions from Ian McCann — lists and reviews songs from one of roots reggae’s leading talents. Another key figure in the history of Jamaica’s popular music is the late Justin Hinds, whose interview dates from the early 90s. In this interview he gives some great insights in the early days of his career.

Also Culture’s Joseph Hill is no longer with us. His interview was done just after he had secured a deal for his “Lion Rock” set in the early ’80s. While Joseph Hill & Culture was dropped by Virgin, Island Records decided that they wouldn’t release Ijahman Levi’s third album “Tell It To The Children”. About this, and much more other things, he talks in the interview. The shortest interview featured in “More Axe 3” is with Prince Hammer, done on a day when Ray Hurford was due to interview Mikey Dread and ended up in doing like four interviews in one afternoon. Trevor Hartley isn’t as well known as the other artists featured here, but his interview is worth reading as he provides interesting insights into dealing with major labels. The book is rounded off with an article about Augustus Pablo, which actually was put aside in favour of an interview (published in “More Axe”) when Augustus Pablo turned up in person.