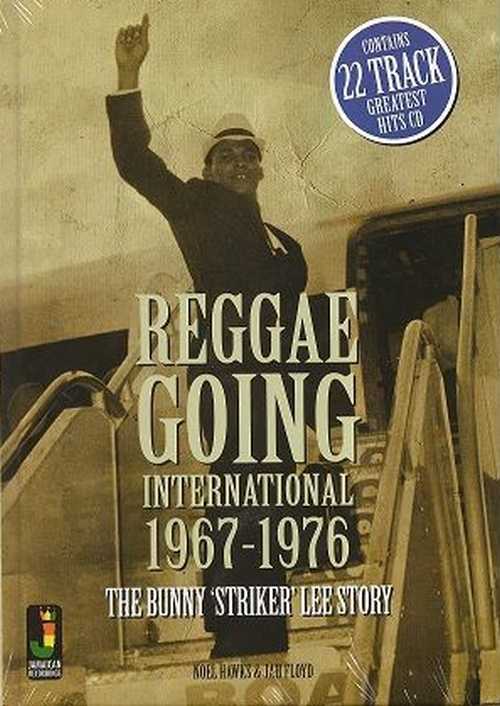 “Reggae Going International 1967-1976 – The Bunny ‘Striker’ Lee Story” is a must-have book for anyone interested in the history of reggae music. Who else than Edward O’Sullivan Lee better known as Bunny ‘Striker’ Lee, the Jamaican producer who played an important part in making that history for over forty years, can tell the story of Jamaica’s popular music from the inside?

The man, doubtless the most successful producer in reggae music of all times, is a born story-teller who has worked with so many artists and musicians that a book featuring his stories full of detailed information is simply a joy to read. Besides words, the book (200 pages) also features lots of photos (including never-before-seen ones), labels, sleeves and flyers, while the book with the hardcover also includes a free 22 track compilation cd featuring packed phat with hit recordings from the rocksteady, early reggae, reggae, and rockers eras.

“Reggae Going International 1967-1976” is Bunny ‘Striker’ Lee’s own, unembellished story, told to and inscribed by Noel Hawks and Jah Floyd over the course of five years. It must have been an immense task as well as a challenge for the two authors to put Bunny Lee’s memories in the right place and context, but they’ve fully succeeded to do so and the final result is truly an amazing piece of work.

The reader is treated to the captivating story of a man whose contribution to the story of Jamaican music can’t be underestimated. Started as an independent record promoter for in the early ’60s for people like Leslie Kong, Coxsone Dodd, Duke Reid, Joe Gibbs, and Ken Lack, he became a producer himself in 1967 and his unmatched run of hits earned him the title of Jamaican producer in 1969, 1970, 1971 and 1972. He was one of the first Jamaican producers to break into the UK National Charts with Max Romeo’s “Wet Dream”. Furthermore he was the winner of the first Jamaican Gold Record for Eric Donaldson’s “Cherry Oh Baby”, and also holds the record for the longest consecutive period at the Number One position in the Jamaican Charts with John Holt’s “Stick By Me”. Besides that he was instrumental in the creation of dub and released the first ever King Tubby albums. And the list goes on as can be read in this book, which should be purchased by any self-respecting reggae fan.

The inserted cd on the Kingston Sounds label includes rocksteady hits such as Roy Shirley’s “Music Field” and The Uniques’ “My Conversation”; early reggae hits like Max Romeo’s risqué “Wet Dream” and Pat Kelly 1969 smash hit “How Long”; and reggae hits such as John Holt’s “Stick By Me” and Eric Donaldson’s “Cherry Oh Baby”. From Bunny Lee’s roots, rockers & flying-cymbal output this compilation features Cornell Campbell’s “Dance In A Greenwich Farm” and Johnny Clarke’s “None Shall Escape The Judgement”. Also a selection of dubs mixed by King Tubby, and deejay records from Dennis Alcapone, I Roy and Jah Stitch are present.