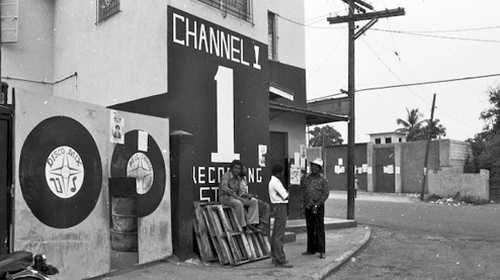 The main concept of the useful “Small Axe Guides” is to tell the history of Jamaica’s popular music through reviews of music releases. It implies that you can’t expect these books to be complete, because it simply ain’t possible to cover everything that has been put out. That’s why these books are rightly called “Guide”. All the books are a labour of love and the costs — when you purchase one directly from Ray Hurford — are kept extremely low in order to give as many people as possible the opportunity to get a copy.

While working on the seventh issue of the series, a guide for ‘Rockers’ (a style indelibly associated with ‘Roots’), he decided to split up the guide in two parts due to the staggering amount of 400 album reviews. Imagine… 400 album releases within four years time!!! It even might have been much more as it simply isn’t possible to be complete, as stated in the previous paragraph. Featured are writings about 48 singers, 36 deejays, 9 vocal groups, 3 bands, 1 musician, 10 producers, 2 engineers, 1 studio and 1 poet. Below we have featured parts of the book’s Intro page.

The Rockers era was unlike the Reggae era, which gave us the ‘Deejays’, or the ‘Roots’ era which gave us ‘Dub’. What it did very successfully was for the first time mix all the various parts of reggae music together – instrumental albums, vocalists, groups, bands, deejays and dub.

And if you are thinking that the Rockers was all about studios and big producers – think again! Artists/producers like Augustus Pablo, Derrick Harriott, Bob Andy, and Niney were all very active during this era. Augustus Pablo in particular was very popular. One of his labels was called ‘Rockers’ and apart from his own albums he also released a magnificent set with Hugh Mundell and the vocal group Tetrack.

Around about 1976/77, Joe Gibbs finally started to assert himself. First came the Prince Far I set ‘Under Heavy Manner’, then the Dennis Brown set ‘Visions’, then the Trinity set ‘Three Piece Suit’, followed by the album that almost defines the Rockers sound, Culture’s ‘Two Sevens Clash’. The songs, the sound, even the sleeve was from that time.