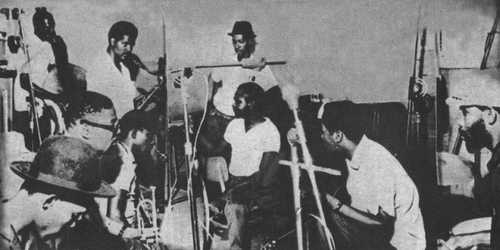 Apart from Reggae music, we can’t think of any other music genre that has x-amount of cuts (singers, deejays, instrumentals or dubs) on the same riddim – backing track of a record – or has producers who regularly come up with new versions of a popular riddim. In Reggae Music there are literally hundreds of versions of certain riddims, with even several entire “one riddim” albums devoted to them. It makes people who are not into Reggae music state that “all Reggae sounds the same”, as they don’t understand the nature of it. However Reggae aficionados like it and riddim spotters love it! And although in these times, internet gives access to databases containing a staggering amount of Reggae and Dancehall riddims, it’s truly a pleasure to see the ‘Rhythm Wise’ book re-published, almost three decades after it was first published.

The idea for the first volume of “Rhythm Wise” originally came from Steve Barrow. He in fact had already began listing out rhythms, but had stopped when he was unable to keep up with the steady supply of 7″ singles coming from Jamaica, and the 12″ singles released in the UK and USA. However in October 1984, Ray Hurford was able to introduce Steve Barrow to Colin Moore aka the Fencebeater, the latter writing up the 7″ selection for the Small Axe Reggaezine. It was on this first meeting that Steve Barrow suggested to put together a rhythm book. It seemed like a great idea, and one that could really work. Tero Kaski from Black Star in Finland was interested in publishing the book and the trio cracked along at a very good rate checking out many hundreds of 7″ singles. At that time it seemed like the book could be ready for publication sometime early in 1985, but it wasn’t. Steve Barrow’s interest in the book had waned and then it lasted until 1989/1990 before the book was finally published.

The most interesting thing about “Rhythm Wise One & Two” is, that it not only includes databases, but that it reviews the rhythm, thus providing the reader with crucial information like for example the indication that the origin of the melody of the “Satta” riddim is without doubt a tune by arranger Neal Hefti called “The Mafista” from the Batman soundtrack album released in 1966 by RCA. In the text pages, where each rhythm is reviewed, not every record is reviewed, but instead emphasis is placed upon the more notable versions. This in no way means that the other cuts are not any good, it is simply a lack of space that made Ray Hurford do it in this way. An important point to make is that this book is not definitive. Reggae music is a living music, and much of its history is mystery. It would be impossible for anyone to say that there is only X amount of versions to a rhythm, unless that rhythm was brand new.

The only claim being made is that having checked over a 1000 LP’s and about the same amount of 7″ and 12″, this is the information that as been gathered. The music available for checking starts in the Ska: era and goes up to the Ragga era 1988, the closing date on information was 31/12/88, with additional research being entered in June ’89. Dubs are not included in the book – with one or two notable exceptions. Rhythms that are reviewed in the book include a.o. “A Get A Lick”, “Death In The Arena”, “Cuss Cuss”, “Darker Shade of Black”, “Hot Milk”, “Joe Frazier”, “My Conversation”, “One Step Beyond”, “Mad Mad”, “Mean Girl”, “Pick Up The Pieces”, “Swing Easy”, and “The Drifter”. Essential purchase for any self-respecting Reggae fan!!